Siridar-Baron Vladimir Harkonnen (10110 AG - December 10193 AG), commonly known as the Baron Harkonnen, was the penultimate ruler of House Harkonnen, and the chief architect in the demise of Duke Leto Atreides of House Atreides during the latter part of the reign of Shaddam IV.

Born the son of a Harkonnen Baron, Vladimir showed an early interest in attaining power, and was trained to become the heir to House Harkonnen, ahead of his more mild-mannered half-brother Abulurd. During this time, his father served as head to the House Harkonnen and as Siridar and Baron of the planet Giedi Prime.

Vladimir built upon the earlier success of his predecessors, gradually making House Harkonnen more successful through blackmail, subterfuge and treachery.

However, his expectations in this sense were not easily achieved. He deemed Glossu too brutish and stupid to be an effective successor. And despite showering Feyd-Rautha with praise and the promise of eventual leadership, his hold over the cunning and impulsive youth remained tenuous, with Feyd-Rautha even attempting to poison the baron by surgically placing a needle containing what was presumably a slow-acting toxin into the thigh of Harkonnen's male child sex slave.

The Baron recognized efficiency and talent in people, and he has shown remarkable insight in knowing people. This was shown plainly in his use of the twisted Mentat, Piter de Vries. This was also implied in the way he, aged 81, developed the roles his nephews (Feyd and Glossu) eventually took, in an ultimate, yet unsuccessful plan to reinstate Harkonnen power in Arrakis. He also was at least capable of recognizing weaknesses towards himself that bar him from pursuing otherwise advantageous strategies, as implied by when he snapped at Feyd-Rautha when the latter asked why he never got a Bene Gesserit slave despite the obvious advantages it would bring him due to their truthsayer nature "You know my tastes!", implying that he knew his homosexual tastes would bar him from making any effective use of one regardless of their benefits to him.

As a leader of a Major House, Vladimir proved to be incredibly cruel, earning House Harkonnen its notorious reputation. He has been described as a seeker of thrills and pleasures, and showed sadistic pedophilic tendencies. At least once, he has even arranged for a male sex slave he had previously purchased at Gamont to be drugged before retiring to his chambers due to "not feeling like wrestling." He had no qualms in using widespread torture, murder and slavery to maintain power, as is shown, for instance, in his mistreatment of Yueh and Thufir Hawat. The cruelty also characterized the way House soldiers and administrators handle subordinates and prisoners. He was also known to exploit his cruel and ruthless reputation by doing executions perceived to be the result of extremely trivial matters as a way to subtly get rid of threats. This was especially evident in how he dealt with Feyd-Rautha's co-conspirators in the attempted assassination of the baron, where he had the Slave Master summarily executed under the pretense of losing a chess game against Feyd-Rautha, as well as two guards being summarily executed shortly afterward due to their carrying the Slave Master's corpse away without dignity. His cunning elements were also emphasized with his method of handling Wellington Yueh and his role in Duke Atreides' betrayal, where he twisted the words in such a way where he simultaneously kept the letter of the agreement and broke the agreement by "adhering" to his promise of freeing Yueh's wife by "freeing her from her mortal bonds" (ie, killing her) as well as "reuniting" Yueh with her by having him die immediately afterward, and implied he chose this method precisely because a traitor, even one of his own making, is never to be trusted. He is also demonstrated to be very callous towards his own forces, as he did not hesitate to leave his men to die in Leto's holding area just to escape the latter's suicidal attack towards him, either by locking the door behind him (book) or by floating away (miniseries), and celebrating his own survival over those of his men. And though he was generally cunning, his arrogance and intense hatred of House Atreides proved to be his un-doing.

Vladimir Harkonnen died, aged 83, during the defeat of House Harkonnen and Sardaukar forces at the hands of the Fremen on Arrakis in the year 10,193. While watching the looming Fremen forces he was poisoned with a Gom Jabbar, wielded by a young Alia Atreides, his granddaughter.

However, death was not the end for Vladimir. Paul's sister, Alia, was born with her ancestral memories in the womb, including Vladimir himself. Alia fell victim to the Bene Gesserit prediction and initially shared control of her body with the Baron, gradually falling under his power. The vengeful desires of the residual Vladimir Harkonnen persona proved fruitless due to Alia's eventual success in overcoming her possession by suicide.

In his later years, the Baron's most notable feature was his corpulent frame. Vladimir's sheer weight required belt-mounted suspensors to retain mobility, which allowed him to float in midair from place to place, as he was unable to walk under his own power unassisted. It's implied that the Baron's weight was simply the result of his unchecked gluttony, but in the Expanded Dune universe, it's attributed to the Reverend Mother Gaius Helen Mohiam purposely infecting him with a degenerative disease when he raped her. The suspensors also allowed for some levitation to a certain degree, as when he died, his corpse hung inches from the floor while lying sideways.

He was originally a tall, muscular man with red-gold hair in a distinctive widow's peak. Later, he was so morbidly obese that he required suspensors harnessed to his flesh in order to walk. He had spider-black eyes, cheeks like two cherubic mounds, protruding lips and bobbing jowls.

In the David Lynch movie, the baron is hefty, has blue eyes, but is much more unsightly. He has been experimenting with diseases and willingly infecting himself, causing pulsating boils and cysts to sprout all over his skin. His hover suit now appears to be woven into his flesh.

In the 2021 movie, the baron's hover suit is now an implant in his spine, and he is ghost-pale (due to the lack of sunlight on the Giedi Prime) and bears a shaven head. While obese, he is also broad-shouldered and has thick, well-muscled limbs, and is structurally quite handsome. On a similar note, because he tends to wear lengthy robes, the robes combined with his implant causes him to appear abnormally tall (appearing at least nine feet tall while hovering). 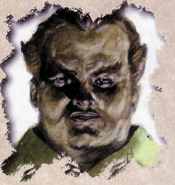 Vladimir Harkonnen, from the Dune (1984 movie), portrayed by Kenneth McMillan. 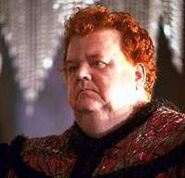 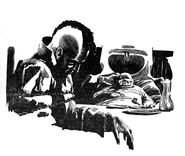 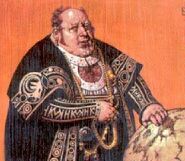 Baron Harkonnen as depicted in the Dune CCG 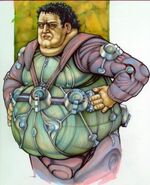 Discrepancies between Encyclopedia and Prelude material[]

In The Dune Encyclopedia, the Bene Gesserit Reports suspect he was not homosexual, but was rather suppressing his Oedipal Complexe, after having sex with his own mother prior to her death. While his affection for boys and young men was the result of a deep narcissism, he himself suffered from psychosomatic impotence. It is implied that he originally had been in love with Jessica's mother, but later eventually tried to kill her. However, in Prelude to Dune he displayed pederastic tendencies from the beginning, but was blackmailed by Gaius Helen Mohiam. He submitted to the blackmail, but attained revenge by raping her..Prelude to Dune also alleges that his obesity is not the result of his general insatiable personality but rather the result of a genetic disease inflicted upon him by the Bene Gesserit, which also serves as the genesis of his enmity towards them.

In the 1984 movie adaptation of Dune, Vladimir Harkonnen was played by the late Kenneth McMillan. In the 2000 Dune and 2003 Children of Dune mini-series the character was played by Ian McNeice. In the 2021 film adaptation, the character was played by Stellan Skarsgård. In the 1984 movie, Harkonnen was given more gritty and hideous appearance, including the presence of black pustules that constantly require draining, as well as made significantly more unstable than in the original book. His fate was also altered slightly in the 1984 film as well: Alia, instead of merely poisoning him, proceeded to also telekinetically shove him through a damaged wall during the climactic battle, resulting in a giant worm devouring him. In the 1984 movie, miniseries and 2021 movie, he was also shown to levitate due to his suspensors, whereas in the book, save for the narration for when he is killed, the suspensors are only stated to be necessary for him to walk.