A thumper is a short stake with a spring-loaded clapper on one end. With the catch released, the thumper would pound repeatedly. It was used to summon a sandworm on the planet Arrakis.

Some thumpers also had a candle, which, when lit, would last for approximately one hour. After the candle burned out, the catch would automatically be released, and the thumper would begin to pound.

Thumper Illustration for the Dune Encyclopedia 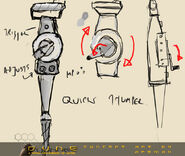