Suk Doctors or graduates of the Suk School were the pre-eminent physicians of the Known Universe. They were highly valued for their advanced knowledge and for the mental conditioning which supposedly prevented any betrayal of patients or the possibility of taking human life. Since it would appear that Suk doctors were only ever in the employ of wealthy families and organisations, it could be assumed that their services came at a high price. Moreover, their conditioning against taking human life was of particular importance for Great Houses and other high-profile organisations, as there would supposedly be no chance of Suk doctors ever being used as assassins.

The Suk School was one of the many institutions that arose out of the Butlerian Jihad. It was a way for humanity to maximise its potential to learn of its own physiology, and ways in which to cure its ailments.

Suk doctors had a diamond tattoo on their forehead, which was meant to be a symbol of their conditioning. The tattoo was generally red; however, Suk doctors returning from The Scattering sported an orange tattoo. They would also at times have long hair, tied at the back with a metal ring.

Historical texts use the word suk as meaning "marketplace," offering one possible explanation for the doctors' name, which is supported by their almost mercenary nature. However, this connection was never made explicit in the historical texts. 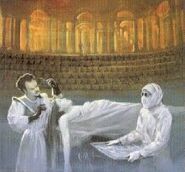 Suk doctors in the DUNE CCG 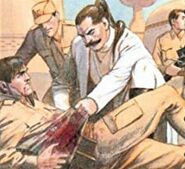 Dean Stockwell as Dr. Yueh in the 1984 Dune Movie

Dr. Yueh as depicted in the Dune CCG

Dr. Yueh as depIcted in the Dune CCG

Robert Russel as Dr. Yueh in the 2000 Dune miniseries 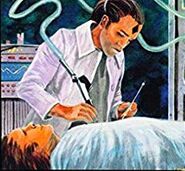 Retrieved from "https://dune.fandom.com/wiki/Suk_Doctor?oldid=32448"
Community content is available under CC-BY-SA unless otherwise noted.