Naib Stilgar was a Fremen who was the Naib of Sietch Tabr and the Governor of Arrakis from 10196 AG onwards. He was a close friend and chief advisor to Emperor Paul-Muad'Dib Atreides.

Stilgar was born at some point in time on Arrakis, and became Naib of Sietch Tabr after calling the previous Naib out. He had two wives, one of whom was Tharthar.

Upon the change of the Arrakis fief in 10191 AG from House Harkonnen to House Atreides, Stilgar was befriended by Atreides Swordmaster Duncan Idaho, who had been sent in advance by Duke Leto Atreides to gauge and study the Fremen. In Idaho's reports to Leto, Idaho had judged Stilgar to be a 'good example' of the Fremen of Arrakis. Indeed, through Idaho's relationship with Stilgar and his tribe, he became so impressed with the Fremen and their ways that Idaho accepted dual loyalties to the Atreides and to Stilgar.

After House Harkonnen attacked Arrakis and House Atreides went renegade, beginning the Desert War, the remaining members of the Atreides family, namely the Ducal heir Paul Atreides and his mother, the Lady Jessica, sought refuge with Stilgar and his tribe, who spared them after trying to take their water and being bested. Stilgar soon became a good friend of Paul's. However, over time, as Paul developed his prescient powers, Stilgar became more of a religious follower. As the War reached it's climax, Stilgar fought during the Arrakis Revolt, which culminated in the Battle of Arrakeen in 10193 AG.

Paul became Emperor in 10196 AG and Stilgar was granted the stewardship of Arrakis later that same year, also becoming a commander in Paul's loose Jihad. In 10208 AG, at the end of Paul's Jihad, Stilgar helped him settle the Tupile Treaty and the matter of the Ixian Confederacy. In 10207 AG, when Paul walked into the desert, blind, Stilgar executed the Reverend Mother Gaius Helen Mohiam, Korba the Panegyrist and the Guild Steersman Edric, disobeying Paul's prior orders against this.

In 10219 AG, later in the regency of Alia, who had become possessed by the ego-memory of Baron Vladimir Harkonnen, Stilgar declared Sietch Tabr neutral in the war between the allies of the Lady Jessica and her grandchildren and Alia. However, he killed the Duncan Idaho ghola (Hayt) who was Alia's wife, after Duncan killed Javid, violating sanctuary, and so was forced to turn against the Regent. After this, he was instrumental in allying the Fremen tribes with the allies of Jessica. Upon the ascension of Leto Atreides II not long after, Stilgar thought of a time earlier in the year when he thought of slaying Leto while he was sleeping, and privately noted that it was now 'too late'.

Stilgar lived a long and prestigious life, thanks in no small part to his diet of spice melange, a pervasive ingredient in all Fremen food and drink. Stilgar's descendants flourished well into the reign of Leto II the God Emperor, and probably beyond. He wrote a preface for the book "Muad'Dib, The Man" for the Princess Irulan. Long after his death, his seed cells were among those stored in the nullentropy tubes of the Tleilaxu Masters.

Stilgar was a thin man, with darkly veined hands a thin nose and a full-lipped mouth in a glistening black beard.

Stilgar and His Men by John Schoenherr (The Illustrated Dune) 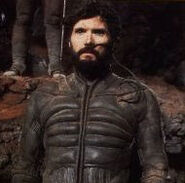 Everett McGill as Stilgar in Dune (1984)

Uwe Ochsenknecht as Stilgar in the Frank Herbert's Dune miniseries (2000)

Steven Berkoff as Stilgar in the Children of Dune miniseries (2003) 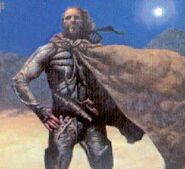 Stilgar as depicted in the Dune CCG

Stilgar in the Dune video game (1992) by Cryo Interactive 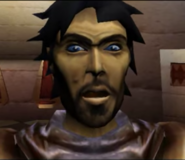