This page is about the novel Sisterhood of Dune.

Sisterhood of Dune, written by Brian Herbert (son of Frank Herbert) and Kevin J Anderson, is the first of the Schools of Dune trilogy of novels, set in the beginnings of the Dune universe created by Frank Herbert. 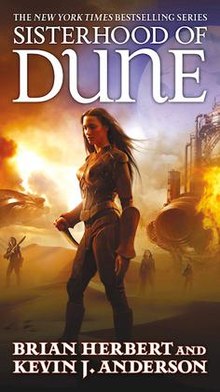 By the time of the novel, the Butler family, under the name Corrino, has consolidated a tenuous hold on the human-occupied universe. The head of the Corrino family, Emperor Salvador, lives in splendor on the planet Salusa Secundus with his brother and trusted advisor, Roderick, but their control of the Imperium is threatened by Manford Torondo, popular leader of the anti-technology Butlerian movement. The demagogue Torondo, deprived of both legs in a bomb blast decades previously, leads Swordmaster Anari Idaho and millions of people across the Imperium to cleanse humanity of its reliance on convenient technologies, often exploiting religious paranoia to advance his agendas. In opposition to the popular movement is the unscrupulous businessman Josef Venport, who holds a near-monopoly on space travel. Advised by his wife Cioba and great-grandmother Norma Cenva, who discovered the secret to creating space-folding "Navigators", Josef plots against his few remaining competitors and funds a secret group of scientific researchers who hold personal grudges against the Butlerians and are willing to salvage and optimize old cymek technology to satisfy their vendettas with Torondo.

Meanwhile, on the planet Kepler, war hero Vorian Atreides attempts to keep his neighbors free from the threat of slavers. An attempt to obtain Imperial protection for his planet is successful, but Vorian is sent even deeper into exile by Salvador and Roderick, who are concerned that the Jihad hero may, through his celebrity, incite a rebellion against their authority. On the planet Lankiveil, the Harkonnen family ekes out a lean existence, far from the glory enjoyed by their ancestors after Vorian Atreides disowned the disgraced Abulurd Harkonnen. While the parents have decided to surrender ambition for survival and a humble existence, the two oldest children, Griffin and Valya, seek to rebuild their family fortunes through service to the Landsraad and the Sisterhood on Rossak, respectively.

Vorian's granddaughter Raquella Berto-Anirul, who survived a poisoning that provided her with the memories and mental presences of her female ancestors, leads the Sisterhood. She thwarts Butlerian sympathizers within her own ranks, who correctly suspect that Raquella and her inner circle are using computers to manage their breeding index, which comprises an immense amount of family data from across the Imperium. Raquella is aided in these efforts by Sister Valya Harkonnen, who finds her efforts to rebuild her family's glory impeded when the spoiled Princess Anna Corrino (sister to Emperor Salvador and Roderick) is sent to Rossak. Anna, viewed as an embarrassment by the royal family, is meant to learn important skills with the Sisters, but instead follows her own childish ambitions and takes a drug designed to induce the near-death transformation that gave Raquella her abilities. Through the new director of the Suk Institute (and former Rossak Sister) Dr. Ori Zhoma, the Sisterhood also plots against Salvador, who it fears may be the ancestor of a potentially disastrous tyrant.

The Mentat Gilbertus Albans attempts to maintain order in his Mentat school on the planet Lampadas and hide the existence of his old mentor, the robot Erasmus. However, Gilbertus is dragged into the Butlerian movement's anti-technology campaign by the fanaticism of his most vocal students, and the furor of Torondo, who coerces Gilbertus to serve as his special advisor. Gilbertus finds himself forced into a confrontation with his best student and friend, Draigo, who is in the service of Josef Venport's VenHold shipping conglomerate. Meanwhile, on the planet Arrakis, the Free Men of Dune, who have abandoned the easier life of the Arrakeen villages, continue to thrive in the desert, encountering various enemies and allies during the course of their existence.

Retrieved from "https://dune.fandom.com/wiki/Sisterhood_of_Dune?oldid=31235"
Community content is available under CC-BY-SA unless otherwise noted.