"Siona is a woman of action. She lives on the surface of enormous energies which fill me with fantasies of delight."
―Leto Atreides II's opinion of Siona[src]

Siona Ibn Fuad al-Seyefa Atreides was a distant descendent of Ghanima Atreides and the great Farad'n Corrino, and the first carrier of prescience-cloaking genes.

Siona was born the daughter of Moneo Atreides, Leto II's trusted attendant and advisor during his last years. Like her father, Siona harbored a strong rebellious streak, and by her teenage years became violently opposed to Leto's domineering rule of his Empire.

Actions against the God Emperor[]

Siona's rough charisma and intelligence helped her emerge as the leader of a group of like-minded dissidents determined to end the God-Emperor's rule through any means necessary. During one incident, Siona barely escaped alive after stealing some of Leto's personal journals and plans, losing ten of her companions to Leto's D-wolves. Her rebellious actions continued even after Leto forced her to join his Fish Speakers. Leto's ambition of breeding Siona with his Duncan Idaho ghola of that time also riled the young Atreides descendant. As a result of Leto's tacit breeding expectation, Siona and the Duncan Idaho ghola did not get along initially.

However, Leto persisted in trying to connect with Siona, in no small part because of her formidable potential, which he later tested in what remained of the deep desert of Arrakis. Initially unfamiliar with the Fremen economy of water, Siona neglected to seal the mouth-flap of her stillsuit for the first few days, hastening her depletion of water reserves. Leto offered Siona a hammock-like fold of his rings to rest in, which Siona accepted. When she was near death from thirst, Leto offered her liquefied Spice Melange secreted from tendrils flanking his face. She accepted the blue essence and fell into a spice trance, during which she experienced prescient visions showing the need for Leto's Golden Path. But her experience did not bring her closer to Leto, and her determination to destroy him continued.

Siona's intentions finally found some substance when she met Idaho again, and the two realized their common ground. Knowing Leto's vulnerability to water - thanks to his sandworm-hybrid nature - the pair hatched a plan to drown the God-Emperor in the Idaho River as he travelled to marry Hwi Noree. That plan succeeded in no small part due to the involvement of Nayla, one of Leto's most fanatical Fish Speakers and Siona's close associate. Having been ordered by Leto to follow any command Siona gave, Nayla severely damaged the main bridge over the Idaho river with a lasgun. Leto fell into the river, where he devolved back into sandtrout. The dying Leto directed Siona and Idaho to the last reserves of melange. Leto, seeing his death and devolution as a necessary step on the Golden Path, had used Siona, Nayla, and Idaho to fulfill his own fate. His final gift to Siona and Idaho was the stewardship of his Empire.

After Leto's death, his plan for Siona and Idaho was realized, and the pair married and had over a thousand children together, only nine of whom were daughters. Their children, and indeed all their descendants shared Siona's invisibility to the prescient vision of the Spacing Guild, another necessary element on the Golden Path. The presence and propagation of humans who were undetectable by prescience, their very fates and futures inscrutable by the prescient, would be necessary to free Mankind from the possibility of control by those with such powers, and by bringing this path to fruition, Leto had accomplished just that. 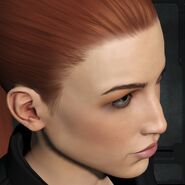