Scytale (10160 AG - 10205 AG) was a Face Dancer, and later a Tleilaxu Master, who played a prominent role in major historical events that spanned more than five thousand years, starting during the rule of Emperor Paul Atreides.

During Muad'Dib's time as Emperor, Scytale appeared as a Face Dancer, who was sent to Arrakis to observe the first Duncan Idaho ghola murder Paul after the death of Chani. However, when the plan failed and the ghola's original Idaho memories emerged, Scytale was killed. His body was spirited back to the Tleilaxu, replicated as a ghola, and his old memories reawakened.

By the time of the Honored Matres, Scytale had been promoted to become the youngest and most junior member of the nine Masheikhs who made up the Tleilaxu ruling Council.

He was later captured by the Bene Gesserit and imprisoned aboard a huge planet-bound no-ship on the Bene Gesserit Chapterhouse. However, when Sheeana, the Sisterhood's Miles Teg ghola, and a Duncan Idaho ghola escaped on the ship he became a willing passenger in their flight into uncharted space. Within his body lay a vial containing genetic samples of numerous individuals, including the Tleilaxu Masters and many of the Atreides line.

Scytale, as a Face Dancer, during the reign of Paul Atreides

Plotting in the background with Gaius Helen Mohiam.]] 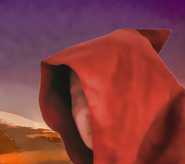 Scytale appeared as a supporting character in three of Frank Herbert's original Dune novels: as part of the conspiracy in Dune Messiah; as a Tleilaxu master in Heretics of Dune; and as a guest of the Bene Gesserit in Chapterhouse: Dune.