The Sareer was the last desert on Arrakis during the time of Leto Atreides II. It served as the site for Leto's fortress Citadel.

The Sareer is flanked by the Forbidden Forest, home of the ferocious D-wolves, the guardians of the Sareer. Beyond that lies the Idaho River, across which a bridge spans that leads to the festival city of Onn (once Arrakeen). Mount Idaho had been completely demolished to provide the raw materials to build the high walls surrounding the Sareer.[1] The physical dimensions of the Sareer are 1500 by 500 kilometers, with a total area of 750,000 square kilometers. This makes it somewhat larger than its closest real-life equivalent, the Rub' al Khali (Empty Quarter) desert in the Arabian Peninsula.

The Citadel itself is taken apart in the Famine Times after the death of Leto II in search of his alleged hoard of spice. 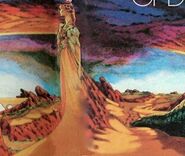 Retrieved from "https://dune.fandom.com/wiki/Sareer?oldid=33246"
Community content is available under CC-BY-SA unless otherwise noted.