The sandworm was an autotrophic animal that inhabited the planet Arrakis. Where they originated is unknown, but were introduced to Arrakis before the events of the Butlerian Jihad. It lived in the vast deserts and sand dunes that stretched across the surface of the planet. Most importantly, sandworms are an essential factor in the creation of the Spice Melange.

Sandworms lived beneath the sand. Attracted to rhythmic vibrations on the surface, they would breach in pursuit of the origin of such vibrations. This was an effort to defend their territory, of which they were highly protective. Thus to see a worm, and live to tell about it, was extremely rare, save for the mysterious fremen, who had achieved some kind of mastery over the beast.

The Sandworm was the predominant lifeform on Arrakis, both honored and feared; vital and deadly.

The sandworms were extremely territorial; as soon as two worms sensed each other's presence, they let out chuffing roars of challenge, bellowing melange-smelling exhaust from their cavernous throats.

By anyone's standards, Sandworms could grow to an enormous size. Dr. Yueh cited that specimens "up to 450 meters long" were spotted by observers in the deep desert. To make a comparison, the largest animal of Earth was believed to be a Blue whale measuring in at only 33 meters, or about 7% of a large sandworm's length.

Many things commonly associated with Arrakis are surrounded in myth and mystery, and the sandworms are no exception. Some people believe that worms from 700 to even 1000 meters existed in the southern pole regions, but this could not be confirmed. See Paul Atreides during his trial of the sandrider for further reading regarding their maximum observed size.

Due to the difficulty of studying these creatures, not much was originally known about the wild sandworms. The longevity of the sandworm was supposedly extreme, estimated in the thousands of years.

Their skin was thick, rough, and orange colored. It served the simple function of armor and was comprised of many scales, each a few feet in size. These scales overlapped and interlocked to form the armor that protected it against internal sand invasion.

As the Fremen discovered, this armor, while all but impenetrable, could be exploited. By prying open the edges of one or more of the scales, the integrity of the armor would be compromised; sand was now free to enter into the sandworms softer insides. This would cause intense irritation for the sandworm. The beast would then roll itself until the prone scale was at the highest point from the desert floor, thus minimizing the amount of sand that could enter.

A fremen poised to "ride" the beast as it rolled its open scale towards its highest point could literally mount the worm. As long as the scales remained open, the sandworm would not submerge. Maker hooks were then placed towards the front of the beast to control lateral movement. As a result, wormriding became a viable, even sacred, method of transport for the Fremen across the surface of the planet. Indeed, distances were even measured in "sandworms", the distance one could ride a worm until it was exhausted and allowed to submerge. A 20-worm ride would be a far and difficult journey.

A sandworm's internal workings resembled that of a massive blast furnace, producing intense heat and flames. This in turn provided the environmental link of supplying oxygen to the nearly plantless Arrakis. The mouth was positioned at the forward end of the creature and could easily consume gigantic objects such as spice harvesters.

The smell of the sandworm has been particularly documented. A strong, flinty, cinnamon smell exuded from the beast, especially from the mouth. Some said it could be smelled before seen. The presence of the spice melange was intense and so was its odor.

The approach of a sandworm towards its breach-point was often indicated by the dry lightning that frequently occurred in the area; a result of static electricity being discharged into positively-charged air.

The main component of the sandworm's diet was sand, and other inorganic and dry components of the Arrakis crust. It is also believed they sifted the sand-plankton for nourishment.

Water was fatal to a sandworm, even in small doses. Water that entered a sandworm's body would act as catalyst to accelerate its metabolism to the point that it became unstable and its vital biological functions failed. This was a violent and presumably painful death for the sandworm. It was occasionally necessary however, since the byproduct of the sandworm/water mixture was the highly toxic poison called the Water of Life, which the reverend mothers used on various occasions.

The process of sandworm creation began when sandtrout banded together after converging on a store of water deep beneath the surface of Arrakis. Indeed, water did occur naturally on Arrakis. However, due to the aforementioned process, it was always destroyed. The sandtrout/water mixture was then converted into a liquid chemical that the sandworm was capable of digesting without being poisoned. On a side note, this chemical could erupt up to the desert's surface in a violent explosion called a pre-spice mass.

The sandtrout that survived this event would then coalesce and complete the metamorphosis into a young sandworm.

Cultural Impact of the Sandworm[]

Insofar as the sandworm was essential to the creation of the spice melange, on a macro scale the sandworm had an enormous impact on humanity.

To the planet's Fremen population, the creature was a spiritual symbol of their faith and saw them as physical embodiments of the One God of their original Zensunni religion. Within Fremen culture the sandworm had several additional names, notably The Maker and Shai-Hulud, which variously meant Old Man of the Desert, Old Father Eternity, or Grandfather of the Desert

Young sandworms were used by the Fremen for special ceremonies. Inducting new Sayyadinas or reverend mothers was a prime example of the sandworms essential cultural role.

Decline of the Sandworm[]

After the rise of the Atreides Empire and the propagation of the Arrakis-variant of the Zensunni religion across the known universe, the reverence paid to the sandworm spread to other worlds. This continued through the rule of Leto Atreides II, due to the fact that he had become something of a hybrid, both man and worm.

The terraforming of Arrakis posed a grave risk to the sandworm, which found life outside the arid desert fatal. The terraforming reversal process had begun by the end of Leto's reign, and he himself devolved back into sandtrout at his death. These events saw the sandworm once again thrive on Arrakis for approximately another 1500 years. During Leto II's reign some smaller sandworms were also removed and shipped off with colonizing vessels during the Scattering. This exercise yielded questionable success.

The hostile actions taken by the Honored Matres saw the termination of all life on Arrakis, including, it was believed, the remaining sandworms. However, this was not before Miles Teg and Darwi Odrade had managed to capture a sandworm. Held in an artificial environment on Chapterhouse, the secret and temporary base of the Bene Gesserit Sisterhood, this worm would have been the key to re-seeding its population.

The first place that Odrade's sandworms began a new spice cycle was on the Bene Gesserit homeworld of Chapterhouse. After their introduction, the sand trout began to turn the once-lush world into a desert.

Author Frank Herbert conceived the sandworms based on dragon mythology, particularly fictitious dragons that guard some sort of treasure, such as the creature in Beowulf and the Dragon of Colchis from the greek myth of Jason. The sandworms of Arrakis will attack humans who attempt to harvest the Spice, as if guarding it (even though the Spice is of no interest for these creatures, since it is waste matter). The sandworms are referred to as "the dragons on the floor of the desert" in Children of Dune.

Illustrator John Schoenherr gave the sandworm three triangular lobes that form the lips of its mouth. They are also depicted as colossal lampreys or leeches (lacking the three mouth as descripted), as well as terrestrial annelids.

In the 1984 film, the sandworms were portrayed as having the three triagular lobes from their lips. In addition, they were also capable of devouring humans, as can be inferred by Vladimir Harkonnen's ultimate fate in said film courtesy of Alia. For the 2021 adaptation, director Denis Villeneuve spent a year designing the look of the sandworms to make them look "possible" and "prehistoric enough", working "from the texture of the skin, to the way the mouth opens, to the system to eat its food in the sand". Their teeth are more spike in shape, in comparison to previous live-action iterations. 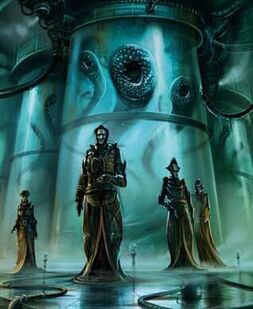 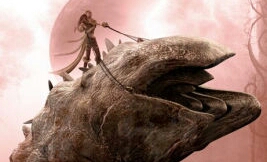 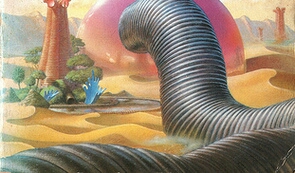 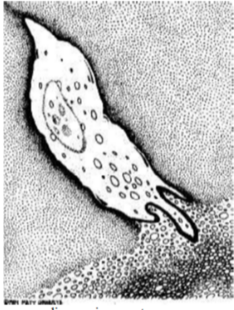 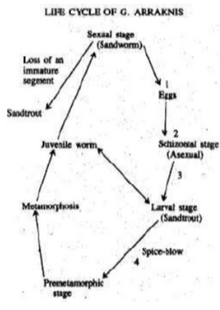 Sandworm Lifecycle - Illustration for the Dune Encyclopedia by Matt Howarth 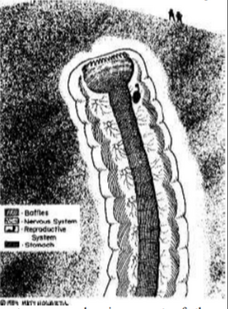 Adult worm - Illustration for the Dune Encyclopedia by Matt Howarth 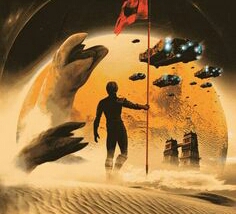 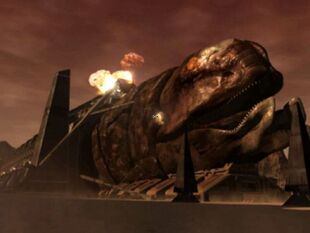 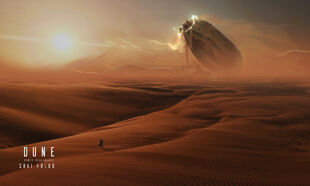 A sandworm as depicted by Nathan Rosario on DeviantArt 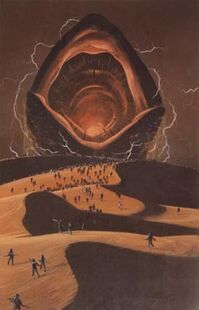 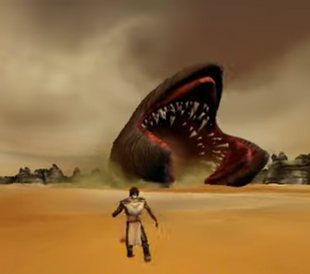 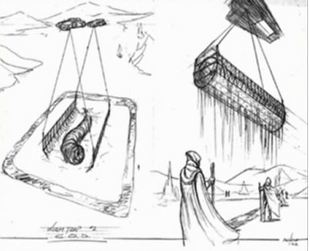 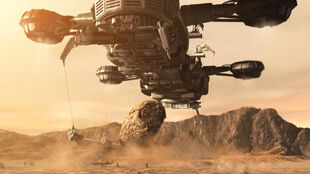 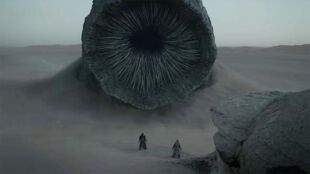 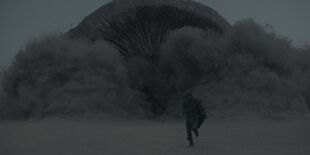 Some of the screen adaptations also use particular themes or leitmotifs to represent the sandworms.

This article is based largely on the Wikipedia article on Sandworm (Dune).