Salusa Secundus was the third planet in the Gamma Waiping star system, and the designated homeworld of House Corrino during its early history, though it later became a prison planet after the migration of the Royal court to the paradise planet Kaitain [1].

A harsh place, with many wild beasts, extreme temperatures, and difficult terrain. It was noted for being one of the only two planets in the Universe where shigawire could grow.

Salusa Secundus was remembered in Fremen tradition as being a temporary home for the Wandering Zensunni; a planet on which nine generations of the Fremen ancestors lived as slaves. However, the veracity of such a belief remains debatable.

Due to the harshness of Salusa Secundus, it became the Corrino prison planet. Those who broke imperial law and were judged guilty were sentenced to be imprisoned on the planet. Many in the empire suspected that the harshness of this world was responsible for breeding Sardaukar troops. This was a theory maintained heavily by Atreides generals, namely that the harsh environment of the planet was responsible for the development of a fierce, hardened people.

This theory was further strengthened by the discovery by the Atreides of the resilience and fighting abilities of the Fremen on Arrakis. However, prior to the time of Muad'Dib, very little was truly known of Salusa's climate. The origins of the Sardaukar and the source of their numbers remained only in speculation.

In 10193 AG, Paul Atreides wrested the Imperial Throne from House Corrino. Before taking the throne, Paul promised Shaddam IV that he would keep a throne on Salusa Secundus, and that the planet would be transformed into a pleasant and beautiful world. This move was outwardly to show that he maintained respect for Shaddam, but in truth the move was to rob the deposed Emperor of the training grounds for his Sardaukar.

Shaddam IV then went into retirement, ruling over Salusa Secundus with the majority of his Household in accompaniment. From his deposed home, Shaddam witnessed the birth of his grandchild, Farad'n Corrino; sired by Dalak Fenring, whose mother was Wensicia Corrino. It was also from the planet that Shaddam continually tried to encourage Count Hasimir Fenring to re-join him, so that together they could wrest the Imperium back to House Corrino.

After the aborted attempt on Paul's life on Arrakis by Hasimir's daughter Marie Fenring, who was killed by Alia Atreides, and the subsequent second attempt on his life by the Count Hasimir himself and his wife, Margot Fenring, were exiled permanently to Salusa Secundus. 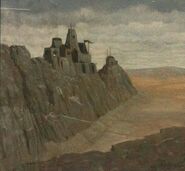 The part of Frank Herbert's Children of Dune which adapts Dune Messiah depicts a funeral for Shaddam Corrino IV on Salusa Secundus, and planning scenes of the conspiracy against House Atreides are shown there.

In the 2021 film, Piter de Vries goes to Salusa Secundus to meet with the Sardaukar regarding their involvement in the attack on Arrakis. Though Salusa Secundus' environment is described as being similar to Arrakis, scenes there in the film take place in the rain.

Some of the screen adaptations also use particular themes or leitmotifs to represent the planet Salusa Secundus.