Ramallo was the Fremen Sayyadina, or rogue Reverend Mother of Sietch Tabr. She lived during the time House Atreides came to administer Arrakis under Imperial decree in 10,191AG.

Ramallo was a Fremen woman who had taken the Water of Life and changed it successfully, thus unlocking her Other Memory. She was a mother figure and a woman of wisdom for the Fremen of Sietch Tabr. Upon their arrival, she accepted Lady Jessica, a Bene Gesserit adept, and her son Paul, offering them both cryptic advice about the future.

When the Fremen of Sietch Tabr were forced to move deeper into the desert in response to increasing Harkonnen aggression, Ramallo declared that she was too old to survive the journey. Jessica succeeded Ramallo, who died just as Jessica successfully changed the Water of Life. 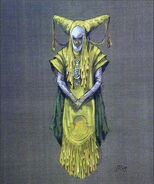 It has been speculated, due to her behavior and her portrayal in the 2000 miniseries (Jessica refers to her as "one of our missionaries"), that Ramallo may have been an actual Bene Gesserit who had gone rogue, as opposed to simply occupying a position set up by the Sisterhood's Missionaria Protectiva, who had planted myths and legends on Arrakis eons before the arrival of the Atreides. However, no direct evidence for this theory exists.