Poison snoopers are mechanical devices that were designed to detect poison in food (chaumas) or drink (chaumurky). Typically, there were two types of snooper: fixed and portable.

Fixed poison snoopers were usually fixed to the ceiling of rooms where people took their meals. They remained active and would emit an alarm if poison was detected.

Portable snoopers were usually small hand-held boxes with a hose extension. The hose had a sensor on the end, and would be passed over the food or drink by the user. Like the fixed snooper, it would emit an alarm if poison was detected.

Snoopers were expensive devices, and were usually employed by wealthy families during the days of the Faufreluches. However, those families usually required snoopers because they were wealthy. Indeed, such devices were quite common when Great Houses of the Old Imperium were feuding.

By the time of the Honored Matres, poison snoopers were still in use. However, they had become smaller and less cumbersome. 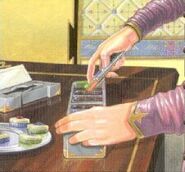 Poison Snooper as depicted in the Dune CCG 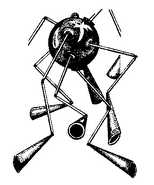