Piter de Vries [d. 10191 AG] was a Twisted Mentat developed by the Bene Tleilax. He served House Harkonnen under the Baron Vladimir Harkonnen. De Vries was an ambitious and impatient sadist whose evil rivalled that of the Baron. The only mistake in his calculations he ever made was that Lady Jessica would bear Duke Leto a daughter, not son.

Piter De Vries was a tall, slender man with effeminate features. He had inky blue-within-blue eyes, red lips due to consumption of sapho juice, a pointed chin and frizzy hair.

A devious, cunning individual, de Vries was responsible for discovering how to break the Imperial Conditioning of a Suk doctor. He discovered that if he held a loved one of the Suk doctors to ransom, he could control their behaviour any way he wished. He forced the betrayal of House Atreides by Dr. Wellington Yueh. De Vries had kidnapped Yueh's wife, murdered her, and convinced Yueh that she was still alive. De Vries had promised that he would return his wife to him if he were to do the Harkonnens' bidding. The breaking of Yueh's Imperial Conditioning led to the death of Duke Leto Atreides.

De Vries was killed by Duke Leto when he mistakenly perceived de Vries to be the Baron Harkonnen. In a drugged state, Leto bit down on a poison gas tooth imbedded in his head by Yueh just before Leto was captured during the invasion of Arrakis. The Baron narrowly escaped, but de Vries was killed. In this way, Yueh managed to exact vengeance on the man that killed his wife.

David Dastmalchian as Piter de Vries in 2021 Dune part One 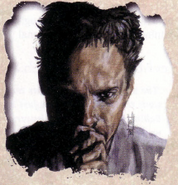 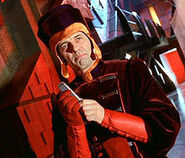 Brad Dourif as Piter de Vries in the 1984 Movie

Piter de Vries as depicted in the Dune CCG

Piter de Vries and the Baron - Illustration by John Schoenherr

Brad Dourif as Piter de Vries in the 1984 Movie