Otheym was a renowned Fremen fighter and devoted follower of Paul Atreides. He was a key figure in the training of Fremen fighters in the Weirding Way, and in the liberation of Arrakis from House Harkonnen.

Originally from Sietch Gara Kulon, Otheym came to Sietch Tabr to join Muad'dib's crusade and was one of the first Fedaykin. Otheym was also the one tasked with taking the Waters of Life to a very large pre-spice mass, which if intiated, would have created a deadly chain reaction ultimately destroying all vectors of the sandworm.

Otheym later served as a senior commander in the spread of Muad'dib's Jihad across the Known Universe. He returned to Dune after contracting the spitting disease on Tarahell. A true Fremen and friend to Muad'dib until the end, Otheym provided details on those plotting against the Atreides Emperor.He had one daughter named Lichna with his wife Dhuri.

Otheym as depicted in the Dune Collectible Card Game 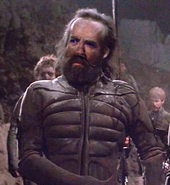