Norma Cenva was a woman who lived BG.

She was Aurelius Venport's wife, and the real designer of the Guild Ships. However she gave him her ship's designs, along with five children.

" You think a man designed the first Guild ship:' Your history books told you it was Aurelius Venport? They lied. It was his mistress, Norma. She gave him the design, along with five children. He thought his ego would take no less. In the end. the knowledge that he had not really fulfilled his own image, that was what destroyed him. "
― Leto II, God Emperor of Dune, page 137 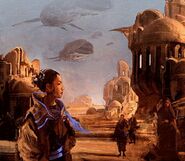 thumb|Norma Cenva
Add a photo to this gallery

Retrieved from "https://dune.fandom.com/wiki/Norma_Cenva?oldid=37719"
Community content is available under CC-BY-SA unless otherwise noted.