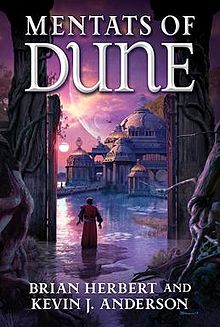 Mentats of Dune, written by Brian Herbert (son of Frank Herbert) and Kevin J Anderson, is the second of the Schools of Dune trilogy of novels, set in the beginnings of the Dune universe created by Frank Herbert.

With anti-technology Butlerian forces of Manford Torondo growing in strength and influence, Prince Roderick Corrino sees a threat to the Imperial power of his brother, Emperor Salvador. Industrialist Josef Venport squares off against Torondo, whose interference thwarts Venport's business interests. Meanwhile, Gilbertus Albans grows increasingly fearful for his Mentat School on Lampadas (and the copy of the thinking machine Erasmus he is hiding there) as Torondo grows bolder. When Gilbertus refuses to force his Mentats to swear an oath to the Butlerians, his school is invaded and his past as a "machine sympathizer" is revealed. He is executed by Manford, but Anna Corrino escapes with Erasmus. Meanwhile, a riot incited by Torondo results in the death of Roderick's daughter; Salvador seizes the lucrative melange mining operations on Arrakis from Venport, who soon uses the constant danger of giant sandworms to orchestrate the Emperor's assassination.

Raquella Berto-Anirul has reestablished her Bene Gesserit school on Wallach IX, thanks to the help of Josef Venport. Valya Harkonnen, now a Reverend Mother, retrieves the hidden computers from Rossak and hopes to succeed the declining Raquella as Mother Superior. Raquella believes that the only hope for the Sisterhood to survive is for the Wallach IX sisters to reconcile with Dorotea's faction on Salusa Secundus; her health failing, she summons Dorotea to the School and forces Dorotea and Valya to put their differences aside and agree to work together for the good of the Sisterhood. Naming them co-leaders, Raquella dies; Valya however, still bitter about Dorotea's betrayal, uses her newly discovered power of Voice to force Dorotea to commit suicide. Valya declares herself to be the sole Mother Superior, and ingratiates herself to the new Emperor Roderick.

Vorian Atreides, feeling guilty for the death of Griffin Harkonnen, tries to help his struggling family with a secret infusion of funds to their whaling business on Lankiveil. He next travels to Caladan to meet his descendants; soon tragedy begins to befall the Atreides, and Vorian realizes too late that Griffin and Valya's younger sister Tula has visited Harkonnen vengeance on them.