Lady Margot Fenring, was the Bene Gesserit wife of the Mentat Count Hasimir Fenring. Despite superficially falling under the influence of House Corrino, Margot fully served the Sisterhood to many ends. After the vast reduction of Bene Gesserit influence following the Ascension of House Atreides, Margot and her husband dedicated themselves to serving their own ends.

The Sisterhood allowed her to be married to Count Hasimir Fenring, the ruler of House Fenring, a House Minor long aligned to House Corrino. While present in the Padishah Emperor's court she persuaded Shaddam to marry Reverend Mother Anirul Sadow-Tonkin, whom the Sisterhood knew would not yield House Corrino any sons.

As the wife of Hasimir Fenring, Margot was resident on Arrakis during his temporary governorship. Prior to their departure, and the arrival of House Atreides, she left an encoded message for the Lady Jessica Atreides, warning her of House Harkonnen's planned treachery.

"TO THE LADY JESSICA — May this place give you as much pleasure as it has given me. Please permit the room to convey a lesson we learned from the same teachers: the proximity of a desirable thing tempts one to overindulgence. On that path lies danger. My kindest wishes"
―MARGOT LADY FENRING

The visible note contained the code phrase every Bene Gesserit not bound by a School Injunction was required to give another Bene Gesserit when conditions demanded it. Jessica's fingers detected the subtle coded dots, scanned them in a single passage:

"Your son and Duke are in immediate danger. A bedroom has been designed to attract your son. The H loaded it with death traps to be discovered, leaving one that may escape detection. I do not know the exact nature of the menace, but it has something to do with a bed. The threat to your Duke involves defection of a trusted companion or lieutenant. The H plan to give you as gift to a minion. To the best of my knowledge, this conservatory is safe. Forgive that I cannot tell more. My sources are few as my Count is not in the pay of the H"
―In haste, MF.

Unfortunately, Margot's warning is not enough to stop the Harkonnen plot against the Atreides. Duke Leto Atreides I is killed, and Jessica and her son Paul are forced to flee into the desert of Arrakis.

Later Margot is sent by the Bene Gesserit to seduce Feyd-Rautha Harkonnen and to preserve the bloodline by retrieving his genetic material (through conception) for their breeding program. She also intends to plant deep in his deepest self the necessary prana-bindu phrases to bend him, (a Hypno-ligation of his psyche). As she and her husband discuss what a shame it is that Paul Atreides is dead (as everyone thinks he is at that time), Margot prophetically recounts a Bene Gesserit saying: Do not count a human dead until you've seen his body. And even then you can make a mistake.

Margot has shared some of her training with her husband since when the Count focused on Paul, he saw with eyes his Lady Margot had trained in the Bene Gesserit way, aware of the mystery and hidden grandeur about this Atreides youth. Hasimir subsequently refuses Emperor Shaddam IV's command that he kill Paul.

Soon after, as Reverend Mother Gaius Helen Mohiam watches Paul and Feyd-Rautha duel to the death, she comments on the existence of Margot's child by Feyd: If both died that would leave only Feyd-Rautha's bastard daughter, Marie Fenring still a baby, an unknown, an unmeasured factor, and Alia Atreides. 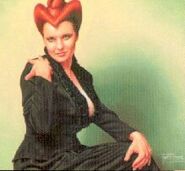 Lady Margot as depicted in the Dune Trading Card Game.