Liet Kynes, (10156 AG - 10191 AG) was the son of Pardot Kynes and the father of Chani (who became the concubine of Emperor Paul Atreides). Liet was a prominent imperial planetologist/ecologist of Arrakis, the Judge of the Change, and the secret leader of the Fremen at the time House Atreides took control of Arrakis in 10191 AG.

Through his intelligence network, Duke Leto Atreides quickly came to realise that, as well as maintaining official imperial duties, Kynes also possessed some authority with the Fremen. Reports indicated that Kynes had "gone native". As a result, Duke Leto attempted to show Kynes as much as possible that he was taking control of the planet in an honourable fashion. Moreover, Leto realised that if he could get Kynes on his side, it could possibly go a long way in winning over the Fremen, who had long-standing suspicion and distrust for the Faufreluches due to their lack of concern for the welfare of the native inhabitants of Arrakis.

Kynes was a tall, thin man with long, sandy hair, a sparse but mussed mustache and beard and under heavy brows, eyes that were fathomless blue-within-blue. 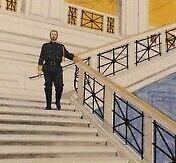 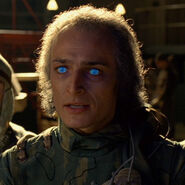 Sharon Duncan-Brewster as Liet Kynes in the 2020 Dune film

Kynes was portrayed by Max von Sydow in the 1984 Dune film, Karel Dobrý in the 2000 Dune miniseries, and Sharon Duncan-Brewster as a gender-swapped female Kynes in the 2021 Dune film.