Edit
watch 01:33
Wiki Targeted (Entertainment)
Do you like this video?
Play Sound

Leto Atreides II, (10205 AG - 13724 AG) also known as the God-Emperor, was the second son of Paul Atreides and his Fremen concubine Chani Kynes, daughter of Liet Kynes. He was born just after his twin sister Ghanima. After the death of his aunt, the regent Alia Atreides, Leto II proclaimed himself Emperor of the Atreides Empire, and ruled for approximately 3,500 standard years, guiding humankind with his iron fist towards survival. He was named after the Duke Leto Atreides, his paternal grandfather, and Leto Atreides II the Elder, his older brother, who was murdered in infancy.

Leto II and his twin sister Ghanima were born on planet Arrakis during the reign of Emperor Paul Atreides. Their mother Chani died shortly after giving birth to the two children, mainly due to complications arising from large amounts of contraceptives that were surreptitiously given to her by Paul's legal wife Irulan Corrino. Paul had anticipated the birth of a daughter, Ghanima, due to his prescient visions. However, Leto's arrival came as a surprise to the Emperor. Both children were pre-born.

Following Chani's death, and the apparent death of their father in the desert of Arrakis, Leto, and his sister became the legal responsibility of Paul's younger sister, the regent Alia. Though they were granted a fine upbringing, little attention was bestowed upon them by their aunt, who was possessed by Abomination and enthralled by her own power and the mysticism developed around the Atreides name by Paul.

When they were nine years old, Leto and Ghanima gained the attention of their paternal grandmother, Lady Jessica, who returned to Arrakis from Caladan to inspect them as part of her obligations to the Bene Gesserit. While visiting, Jessica sensed the latent power present in the twins, and upon the realization that they could be a threat to the psychologically unstable Alia, pressed her Fremen allies to help protect them.

At this same time, Leto's prescient powers began to emerge. Through visions and intuition, he discovered the Golden Path that his father had earlier uncovered and begun to follow. However, unlike Paul, Leto developed a greater understanding of the Golden Path's implications. He sensed not only its dangers but also the painful steps that had to be taken to avoid it unraveling, which would be to the peril of humankind.

Leto and Ghanima escaped an assassination attempt by House Corrino. The two split up, with Ghanima conditioned to believe her brother was dead so that if she were to be interrogated on his whereabouts, she would not be able to tell the truth. Leto slipped into almost total anonymity, using the time and relative seclusion to build a foundation of power and knowledge through which the full impact of the Golden Path could be realized. To enact such steps required a strong (almost brutal) grip on power and longevity that would override the shortsightedness and impatience of Man.

Thus, after spending time amongst a variety of fringe Fremen elements, including The Preacher, Leto accepted sand trout upon his body and began the conversion into a human-sandworm hybrid. This transformation (which, in the beginning, was essentially a form of exoskeleton), boosted Leto's strength, reflexes, and speed immensely, and he was able to move across large distances on foot.

After his transformation had progressed to a sufficient stage, Leto emerged from the desert and returned to the city of Arrakeen to confront the possessed Alia and claim the throne of the empire. After Alia managed to briefly overcome her possession and take her own life, Leto claimed the title of Emperor and promptly married his sister to consolidate his hegemony. The marriage was purely legal. Ghanima accepted Farad'n Corrino as her mate, but their descendants would be known as Atreides.

Toward the end of his reign, Leto sensed the need for the next step on the Golden Path and knew that his rule must end for further progress to occur. Thus using Siona - a distant descendant of Ghanima and her concubine Farad'n - and a Duncan Idaho ghola created by the scheming Tleilaxu, he sowed the seed of the Atreides genes for future generations. Additionally, he began the reversal of the terraforming on Arrakis and witnessed the planet begin to revert into a desert world from the realized Fremen dream of a lush paradise.

Concurrently, Leto fell in love with Hwi Noree, a direct gender-opposite clone of Leto's former friend and advisor Malky, who was created by the Tleilaxu in an Ixian no-chamber. Since Hwi was conceived and raised outside of his prescience abilities, Leto was unaware of her until she was presented to him as an ambassador. Leto was instantly smitten with Noree, and within a few months proposed marriage to her, and set the date of betrothal.

A few weeks later; Leto, Hwi, and his chief minister Moneo Atreides lost their lives when Siona ordered the bridge they were crossing to be cut by a lasgun by her assistant, Nayla. They all fell to their deaths into the Idaho River.

Legacy During the Scattering and Later[]

During and after his reign, Leto II was viewed as an extremely controversial figure. Following Leto's death, a chain of dramatic events took place over a span of 1500 years. This included the Famine Times, the Scattering, and the recreation of the sandworms on Arrakis, which emerged from the sandtrout that escaped from Leto's body when he fell into the water.

Many of the established power brokers who existed at the start of his rule were either destroyed or significantly weakened, due to his draconian tactics and a monopoly on the Spice Melange. To his admirers, Leto II was known as the God-Emperor, but to his enemies (including the Bene Gesserit) he was labeled the Tyrant of the known universe.

It was also said that within each sandworm that grew on Arrakis after his death, a pearl of his consciousness existed. This theory was supported when, approximately 1500 years after his death, an Arrakeen girl named Sheeana, who was a direct descendant of Siona and Duncan Idaho, had the power to control the worms.

The religion of the God-Emperor continued on Dune, until the attack on the planet by the Honored Matres and also with those returned to the Old Empire from the Scattering, who called Leto II Dur or Guldur.

The God Emperor of Dune as illustrated in a 2021 edition of the novel of same name. 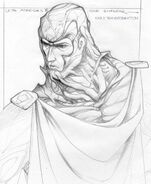 Leto and the Festival City of Onn - Illustration by Klaus D. Schiemann 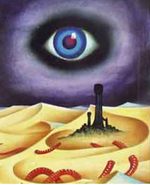 Cover art from the Hebrew edition of God Emperor of Dune

"Madness in method, that is genius."
―Leto Atreides II