The Red Duke
Leto the Just

Dune
Duke Leto Atreides I (10140 AG - March[1] 10191 AG), frequently referred to as the Red Duke and sometimes called Leto the Just, was the twentieth and penultimate Duke of House Atreides and the father of Emperor Paul Atreides and Regent Alia Atreides with Bene Gesserit concubine, Lady Jessica. Well known for his even-handed and compassionate leadership style, Leto ruled over Caladan, and later Arrakis, all while at war with the powerful Baron Harkonnen.

Leto Atreides I was a tall man with olive skin and long black hair.  He had a narrow face full of angles and planes, with a high-bridged aquiline nose that gave him the look of a hawk, and woodsmoke in his gray eyes.

Alejandro Jorodowski wanted the late actor David Carradine to portray Leto Areides I in his unsuccessful attempt to produce a film adaptation of Dune. Jodorowski became interested in Carradine for the role after watching his series Kung Fu. When they met, the director reportedly passed him a bottle of Vitamin E pills and told him to "take one every day". Carradine swallowed the pills immediately and Jodorowski knew he was "the person I am searching for".

Alejandro Jodorowski has stated that he also considered himself for the role, especially given that his son, Brontis, was to have the role of Paul.

In the 2000 Dune Miniseries, he was portrayed by the late William Hurt.

In the 2021 film adaptation of Dune, he was portrayed by actor Oscar Isaac.

Oscar Isaac as Leto Atreides in the 2021 Dune movie 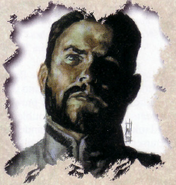