Korba was one of the original Fedaykin under the command of Paul Atreides during the Arrakis Revolt. After Paul succeeded Shaddam Corrino IV on the Golden Lion Throne, Korba became a leading priest on Paul's Qizarate. His official title was "Panegyrist."

Korba was killed after his complicity in the conspiracy was discovered.

In the TV miniseries, the character of Korba is altered so instead of a desire to martyr him so his religious power would increase drastically, Korba was a rebel hating the Atreides Empire (the Jacurutu). He was also seen to be a friend of the child (and future corrupt-priest like Korba) named Javid. 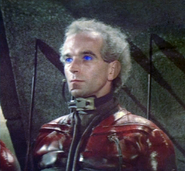 In Dune (1984) it is speculated that the character Korba, who speaks the line at min 93.45 "If you be a Reverend Mother let Shai-hulud judge now!" was played by Dennis Hopper in an uncredited role. In the 2000 Dune miniseries, Korba is mentioned but not clearly identified on screen. In the TV miniseries adaption of Children of Dune, Korba was portrayed by Czech actor Karel Dobrý, who also portrayed Liet Kynes in the original Dune miniseries.