Jamis (10159 AG[source?] - 10191 AG) was a Fremen of Sietch Tabr, best known as the man who was bested by Paul Atreides when he and his mother Jessica were first given sanctuary by Stilgar. He was also known to be adept in playing the nine-stringed baliset.

Jamis had a reputation for fighting ferociously. He was regarded as a good Fremen, but encumbered by the major flaw of faulty self-control. Undoubtedly, Jamis' greatest usefulness to the tribe lay in his superiority as a fighting man; as a raider he was formidable. Stilgar in his Chronicle pays tribute to Jamis' bravery and skill. Even though Stilgar once bested Jamis in a fight, Jamis did not hesitate to save Stilgar's life at Hole-in-the-Rock. Stilgar also spoke of Jamis sharing his water during a siege at Two Birds and of his valiant sacrifice at Bight-of-the-Cliff. When a Harkonnen patrol pinned down a troop from Sietch Tabr, Jamis drew them off so the wounded could be saved. On the other hand, the fury that sustained him in battle also crippled him, for Stilgar had further noted: "There's too much violence in Jamis for him ever to make a good leader —too much ghafla."

This exuberance, however, did not always work to his detriment; it won him a good Fremen woman, Harah, for his wife. Jamis called out Geoff, her mate, and bested him. Harah spoke fondly of Jamis. She noted that he loved their children; Kaleff, Geoff's son, and Orlop, their own. He made no distinction between them and accorded the same devotion to their upbringing. Presumably he taught his sons the rules of water discipline and the Fremen way of fighting.

Jamis was numbered among the troop sent into the desert by Liet Kynes' distrans message to seek the strangers, Paul Atreides and his Bene Gesserit mother. When the troop came upon them at Tuono Basin, Jamis was distrustful of the outworlders and urged Stilgar to do his tribal duty - to eliminate those not trained to live with the desert. Although he agreed with Jamis regarding Jessica, Stilgar saw value in Paul. Unfortunately Jamis never realized the breadth of that value; he attributed Paul's disarming him at the moment Jessica overpowered Stilgar to "witch-force". Burning with resentment at being bested by a mere "child," Jamis invoked the Amtal Rule once they reached the Cave of Ridges. Unconvinced by Jessica's mystical performance, he demanded the right to test her part in the legend through combat with her champion, Paul.

Jessica and Stilgar tried both persuasion and trickery to convince him otherwise, but Jamis persisted. Although Jamis was an expert with the crysknife in either hand, he was no match for one steeped in the devious ways of the Bene Gesserit and trained by the likes of Gurney Halleck and Duncan Idaho. He could have had no conception of the exquisite fineness of Paul's skill. Jamis' death bought Paul his sietch name, Usul, and made him one of the Ichwan Bedwine with the manhood name of Paul-Muad'Dib. It was for Jamis that Paul 'Gave water to the dead', shedding a tear at his unnecessary death.

Befitting a man of his standing, Jamis was given a full ritual funeral. Paul received Jamis' water, as was the custom, and inherited his yali, or possessions (excluding the funeral gifts), and woman, Harah. Specifically, Paul received Jamis' coffee service and a bundle of water rings, Stilgar's pick from the yali as his combat reward, and Paul himself chose Jamis' baliset, as it reminded him of his old teacher, Gurney. The whole tribe rightly mourned Jamis' passing, for indeed, they all felt the loss on the unfortunate day that his temper drove him to challenge Paul Atreides. Jamis seemed to embody the best and worst of Fremen qualities: strength, superb fighting ability, desert wisdom, tribal loyalty, dedication to Fremen dreams and ideals, and closed-minded, bull-headed stubbornness.

"The Songs of Muad'Dib" by the Princess Irulan preserves for us the "Dirge for Jamis on the Funeral Plain":

Do you wrestle with dreams?

Do you contend with shadows?

Do you move in a kind of sleep?

Time has slipped away.

Your life is stolen.

You tarried with trifles,

Victim of your folly. 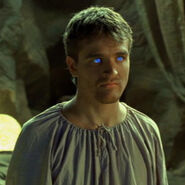 Some or all of this article was copied from the following external source:
The Dune Encyclopedia; Dune (novel)

Retrieved from "https://dune.fandom.com/wiki/Jamis?oldid=36409"
Community content is available under CC-BY-SA unless otherwise noted.