The Ixians were a society that specialized in the production of complex machinery that often flouted the proscriptions of the Butlerian Jihad which led to a taboo on the constructions of machines that bore the exact human mind's image. Its name was derived from the fact that their home planet that was the ninth planet of the Alkalurops system.

During the Rule of Alia, some Ixians had shown their acceptance for the Muad'dib's Golden Elixir of Life religion, calling it Shien-san-Shao. This term indicates that the Ixians' origin might have been some Oriental culture of Earth, likely Chinese. [1]

Even after the liberation of Ix, many within the Imperium felt that the Ixians often strained or broke the universal ban on artificially intelligent machinery. However, astute political dealings, and the hunger for Ixian products, almost always kept the planet one step ahead of an outright invasion by the forces of the Great Houses.

By the time of Paul Atreides' emergence, the Ixians were, other than the Bene Tleilaxu, probably the most successful of the fringe worlds that maintained a sophisticated technological base, having had their technological base rebuilt at the cost of House Corrino reparations. They had effectively seen off competition by House Richese in the field of research and development, and their form of government seems to have been transformed into a technocracy. Politically they operated as a confederacy, at least in title.

During the Famine Times, the Ixians rose up to become a major power in the Known Universe. The Ixians were the first to invent and manufacture no-ships, which contain machines that duplicate the abilities of Guild Navigator, and were able to hide the people within from prescience. These vessels also had the advantage of being far cheaper than traditional space ships. Indeed, it was the development of this cheaper form of space travel which fueled the Scattering.

By the time of the arrival of the Honored Matres, the power of the Ixians was at its apex, due to their alliance with the Fish Speakers, but Bene Gesserit analysts saw them as a failing power, as Ixian society had become a bureaucracy, with no great inventions coming out of the workshops of Ix for centuries.

When the Honored Matres conquered the Old Empire, the Ixians were reduced to being a barely tolerated technological combine. 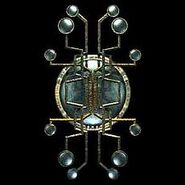 Ixion Symbol from a Tarot card depicted in the Dune encyclopedia

House of Ix in Dune 2 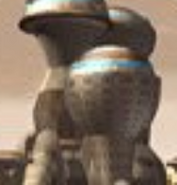 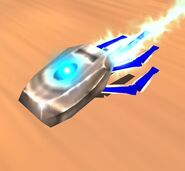 Ixian Technology in the Dune GamesEdit

The Ixians are responsible for providing the technologies for the three Houses to build their unique tanks. This is done by building the Ixian Research Facility at the player's base. Once this is done, the player will be able to build either the Atreides Sonic Tank, the Harkonnen Devastator, or the Ordos Deviator. Other than that, they serve no other purpose.

In the War of Assassins, the Ixians now play a more direct role in combat, interacting with the three Houses as trading partners. An alliance with House Ix can be forged by aiding them in various missions, providing that the player doesn't ally with the Tlielaxu first, as the two are bitter enemies.

Once allied, the Ixians will provide the player with units built from the House of Ix. These include the Infiltrator (a stealth mobile kamikaze unit that reveals cloaked enemy units when it detonates), and the Projector Tank (fast hover tank with light mounted cannon, which when deployed, is able to project holographic images of the player's troops that provides realistic damage, yet disintegrates harmlessly on impact).

The nature of government in Ixian society remains a contentious issue between fans and detractors of the prequel novels by Brian Herbert and Kevin J. Anderson.

The authors' sub-plot of Ix being ruled by a Great House (House Vernius) is never mentioned in Frank Herbert's original novels, in which the planet is mentioned exclusively as a technocracy.

Retrieved from "https://dune.fandom.com/wiki/Ixian?oldid=35776"
Community content is available under CC-BY-SA unless otherwise noted.