The Imperial Opal Palace, the residence of the Padishah Emperors, is located in Corrinth City, the capital city of the planet Kaitain along the Imperial Boulevard: a large garden avenue lined with the statues of the previous Corrino Emperors.

Construction of the Palace Itself began in 1400 A.G. and lasted until 6032 A.G., during the reign of the Padishah Emperor Elrood Corrino VI, who only enjoyed a year of the impressive State Rooms, Imperial Chambers, and extensive landscaped gardens before he was assassinated. 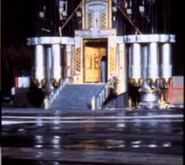 The Imperial Opal Palace as depicted in the cover of Dune: House Corrino, by Brian Herbert and K.J. Anderson.

Guild ship landing on Kaitain in front of the imperial Palace 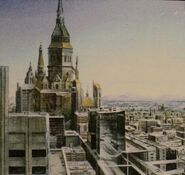 Add a photo to this gallery
Retrieved from "https://dune.fandom.com/wiki/Imperial_Opal_Palace?oldid=33532"
Community content is available under CC-BY-SA unless otherwise noted.