The hunter-seeker was a deadly tool used by assassins. The tiny floating tadpole-like machine was remotely controlled by an operator situated close by.

In 1981's God Emperor of Dune, Leto II Atreides can see through his prescience that his Golden Path has prevented the Ixians from being the cause of humanity's destruction in the future. Leto's Golden Path has prevented a future in which the Ixians released, and ultimately lost control of, self improving Hunter-Seekers that would eventually consume all organic life in the known universe.

Parts of this article require a rewrite.
If you would like to help to improve this article click on the 'edit' tab above.

Velocity: up to 25 meters per second

Ammunition: 1 hour of use

The device floated through the air, using a tiny Holtzman Field Generator to maneuver. The tip held a camera that transmitted a video signal back to the operator. Vision was distorted by the compressed suspensor field. Once detected, the target was almost guaranteed to be killed.

The killing device itself was a tiny needle, tipped with a quick-acting, lethal poison. The needle was retracted until a target is acquired, at which point it appeared, shortly before the device shot into the victim.

Destroying a Hunter-seeker was rather simple. Like any machine, it could be destroyed by being smashed or submerged in water. Paul Atreides employed both means to destroy a Hunter-seeker that had been launched to kill him on Arrakis, shortly before the invasion of House Harkonnen.

Invention of the reversant made the hunter-seeker obsolete.

Hunter-seeker in the 1984 Movie

Hunter-Seeker in the 2000 TV Miniseries 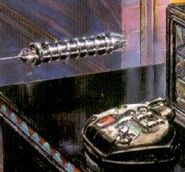 Hunter-Seeker in the Dune CCG
Русский
Community content is available under CC-BY-SA unless otherwise noted.
Advertisement