A Heighliner was a starship used by the Spacing Guild to transport people and equipment across the known universe.

Guild Heighliners were usually immense in size, easily accommodating many thousands of passengers, whole fleets of smaller vessels, and the vast export of planetary goods.

Spacing Guild Heighliners could be used to fold space to travel vast distances across the universe in an instant. They were piloted by Guild Navigators and Steersmen.

heighliners -Illustration for the Dune encyclopedia by Matt Howarth 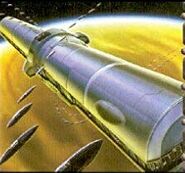 Heighliner as depicted in the Dune CCG

Heighliner in the 1984 Dune Movie 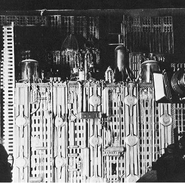 Heighliners were not described in detail by Frank Herbert in his original Dune releases. Both the 1984 and 2021 film adaptations, as well as the 2000 Dune miniseries, show guildships as gigantic cylindrical vessels, though the 2021 film depicts them as ovoid cylinders rather than the circular ones from earlier adaptations. The Dune Encyclopedia, however, states that Heighliners have a globular shape.