Harah was the Fremen wife by custom of Paul Atreides; widow of Jamis; nurse of Alia, Leto, and Ghanima Atreides; wife of Stilgar. Harah's maternal impulse drove her to lavish solicitude not only on her own children but on those of the Atreides Family as well.

Life Before the Atreides[]

Records recount that Harah was won by Geoff. However, the placidity of her life with Geoff was disturbed when he was challenged by Jamis, a challenge which ended in Geoff's demise and in Jamis taking Harah as his woman.

As Jamis' wife, as a desert fighter par excellence, and as the mother of Kaleff (by Geoff) and Orlop (by Jamis), Harah found the tempo of her life quickening. The greater portion of her days was spent in the stillsuit shops or the planting areas, but she devoted much time to rearing her sons and creating the home she wanted for Jamis when he returned from his forays or patrols. It would appear that Harah recounted her years with Jamis as good years, full of achievement and family happiness. This domestic peace would have been shattered, however, when news reached Sietch Tabr of Jamis' death at the Cave of Ridges. Bred as a Fremen, she met the news as a Fremen: her innate resilience allowed her to meet and accept what destiny had next in store for her.

Service To The Atreides[]

By law, Jamis' yali and all his possessions, excluding the funeral gifts but including his wife and sons, belonged to Paul Muad'Dib who was Usul, the boy who had dispatched Jamis in the Tahaddi Challenge. Thus, Harah became Paul's for one year, to take as wife or servant, after which time she would be free to choose as she wished. Over Harah's objections, Paul accepted her as servant. Although her pride was hurt by Paul's rejection of her charms, Harah set aside her vanity with a practicality that surprised Paul and devoted herself to serving him as one she respected and came to love. Her content was augmented when the Lady Jessica asked her to be the infant Alia's nurse.

Some time after Paul and Jessica came to Sietch Tabr, Paul took Chani as his concubine. When the women and children of the sietch were forced to flee the pogrom of the Harkonnen governor, Harah went with them as an honored member of Paul's household. Though lonely in exile, Harah busied herself as Alia's guardian and governess. Trying to control a child like Alia would have been a frustrating job, made more difficult by Alia's knowing and speaking of things beyond her years and by flouting traditional modes of behavior. But Harah's devotion to Alia was unflagging, defending her against the rumours and unkind words of the other women of the sietch, who were afraid of Alia. In return, Alia gave her love to Harah openly. Indeed, Alia's first words to her nurse were "I love you, Harah."

Besides raising Alia and becoming indispensable to her husband Stilgar in the years that followed Paul's ascendance to the emperor's throne, Harah became Chani's closest female friend. As Chani's intimate she stood at the side of her friend when she gave birth to the Atreides twins, Leto and Ghanima, and watched stone-faced as Chani died. It was her terrible duty to guide the now completely blind Paul Muad'Dib first to the creche that held his children and then to the pallet that held Chani's body. Harah was able to perform her last duty for her friend: to be observer of the holy truth and stand beside Chani for the last time at the deathstill.

At Paul's request, Harah, as a friend of the mother, also stood beside Paul at the time of the naming of his son Leto for his paternal grandfather, and of his daughter Ghanima — over Harah's understandable objections (in Fremen 'ghanima' meant a spoil of war). With Chani dead and Paul apparently swallowed by the desert, Harah felt destiny had once more called her to play the role in which she excelled: the Atreides twins needed a mother. But the joy was tempered by disquiet, for these children were much as Alia had been: exasperating, unsettling, and sometimes terrifying. However, with her Fremen background, her sagacity, and her experience with Alia, she proved to be a match for the precocious twins. Coming to love the twins as her own, Harah was devastated by the news that Leto had fallen victim to Laza tigers. She consoled herself by trying to console Ghanima; to ease the pain Harah applied herself to providing Stilgar with every comfort. She gave minute attention to his wardrobe and yali, supervising even the smallest housekeeping detail — preparing coffee, for example, just as Stilgar preferred it: grinding fresh roasted beans to a fine powder in a stone mortar, then boiling immediately with a pinch of melange.

But once again the evenness of her days was shattered by a crisis: early one morning Stilgar called her to view the dead bodies of Javid and, unbelievably, Duncan Idaho and to tell her that he had sent Buer Agarves to Alia with his "final obedience." But the abductors Agarves had unwittingly led to the djedida overwhelmed the fugitives and carried them off to Arrakis and Alia's prison cells. While not present in Alia's quarters in the Keep on that disastrous day when House Atreides established its millennial dynasty, Harah heard the terrible news soon enough: the death of Paul (The Preacher), the suicide of Alia, the seduction of Farad'n, the metamorphosis of Leto.

Harah was a woman with eyes of dense darkness, black hair,a high forehead, sharp cheekbones, an aquiline nose and pale olive skin drawn into frown wrinkles, a witchery in the sharp features of her angular facial features, seeming old for her age.

Molly Wrynn as Harah in the 1984 Movie 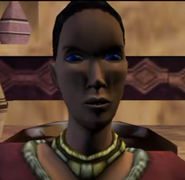 It was likely that Alia's death preceded by her transformation into true "Abomination," diminished Harah. That strong maternal drive that defined her existence for so many years was likely to have been struck a mortal blow. Presumably, Harah lived into old age.

In Greek, the word "Harah" means "Joy". However, in Arabic, the language from which so many Fremen terms originate, it might come from the word "Hurra" which means "Free" or the arabic name "Harra".It may also be possible that he was thinking of the Hebrew word "harah" meaning "pregnant".

In the 1984 Dune movie, Harah was portrayed by actress Molly Wryn. However, her scenes were cut from the theatrical release of the film. She did not appear and was not mentioned in the 2000 or 2003 miniseries.

Some or all of this article was copied from the following external source:
The Dune Encyclopedia