Glossu Rabban Harkonnen (10132 AG - 10193 AG), also known as the Beast, Mudir Nahya (Demon Ruler), and King Cobra by the Fremen, was the older nephew of Baron Vladimir Harkonnen, and the Count of Lankiveil.

He inherited the Harkonnen penchant for sadism and cruelty, but not the cunning. He was best known for his tyrannical and vastly ineffective governance of Arrakis during the Harkonnen fiefdom of Arrakis, as well as during the insurgency of the Fremen led by Paul Muad'Dib. He earned the nickname "Beast" when he killed his father, Abulurd Harkonnen. The Baron planned to let Glossu rule the planet for a time through fear and terror so that when his favored brother, Feyd-Rautha, took over, the new ruler would be welcomed as a hero.

In the novel, while lacking in cunning, he did possess at least some degree of common sense and foresight, as he repeatedly insisted to the rest of the Harkonnens that they not underestimate the Fremen and do a head-count of their forces before occupying Arrakis, and also posed an insightful enough question about his uncle's subversion of Yueh that the baron himself had to give pause.

Rabban was slain and beheaded by the Fremen populace of Arrakeen, whom he had brutalized for many years. 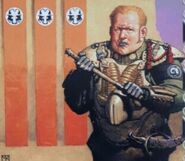 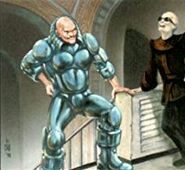 The fate of Lankiveil after the death of Rabban is not known.

Glossu Rabban was portrayed by Paul Smith in the 1984 Dune movie, by László Kish in the 2000 Dune miniseries, and is set to be portrayed by Dave Bautista in the 2021 Dune movie. The first two adaptations depict Rabban as having died via decapitation, though this is not clearly stated in the novel. In the 1984 film, the Baron is informed that the Emperor had Rabban arrested while en route to his ship, and arrives to see Rabban's severed head on a platter. In the 2000 miniseries, when realizing he was not going to be spared by the Fremen, he drops his knife and screams into the air while bracing for the inevitable as the Fremen rush him to decapitate him.