Swordmaster is a title awarded to warriors attaining a certain level of skill in the Ginaz School, during the time of the Faufreluches.

Conceivably, many Great Houses maintained their own Swordmasters as commanders, teachers, and personal guards for their family members.

Swordmasters of Ginaz were regarded superior warriors in every way, superior even to a Sardaukar.

Duncan Idaho was Swordmaster for House Atreides. It was partially through his instruction that the Atreides were able to train a small army that rivaled the Sardaukar in ability in 10,191 A.G.

The name 'Swordmaster' comes from the fact that adepts are highly skilled in bladed weapons (namely knives and swords) and hand-to-hand combat, which re-entered human warfare after shielding systems made the use of guns futile. 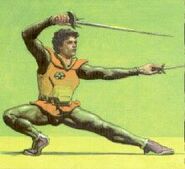 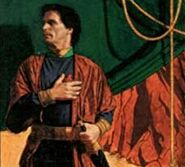 Add a photo to this gallery
Retrieved from "https://dune.fandom.com/wiki/Ginaz_Swordmasters?oldid=37155"
Community content is available under CC-BY-SA unless otherwise noted.