Ghanima Atreides (b. 10210 AG) was the daughter of Paul Atreides and his Fremen concubine Chani Kynes. She was born a little time before her twin brother Leto Atreides II, the God-Emperor. Farad'n Corrino, heir to House Corrino, was her consort.

Ghanima, or Ghani as she was also known, was born on Arrakis in Sietch Tabr twelve years after the ascent of Paul Atreides to the role of Emperor. Ghanima's mother was Paul's official concubine Chani, a Fremen, though the children never knew their mother in person. Shortly after the twins' birth their mother died due to labor complications.

Ghanima (Arabic "غنيمة"), was named for the Fremen term 'spoil of war', a cynical reference by her father for the joy she brought in such a painful and destructive time. Paul's prescience had revealed to him Ghanima’s birth, but not that Ghanima would have a twin brother, Leto II.

Ghanima was to be raised without her father, for shortly after her birth he walked into the desert, as was the custom for blind Fremen. As a result, she was raised by her aunt, Regent Alia Atreides and her stepmother, Princess Irulan Corrino.

Ghanima lacked the assertive streak and degree of prescience of her twin brother. However, thanks to the pair's genetic heritage and the large consumption of Spice Melange by their mother, Ghanima was pre-born and came into being with a full, adult consciousness. Thus she possessed wisdom far beyond her years, and a Bene Gesserit Reverend Mother's skills and ability to recall knowledge from her female ancestors (there is some indication that she had access to her male-line Other Memory as well).

As the twins grew their extraordinary powers became more visible. The Bene Gesserit feared they had been born into Abomination, like their aunt Alia. However, the twins proved able to control the consciousness of the countless ancestors that lurked in their minds, although they occasionally played with fire by calling upon and assuming their parents' personalities as a game.

For a while Ghanima provided her brother with guidance on the formation of the Golden Path. However, as they approached Fremen adulthood, Leto began to conceal aspects of the Path from Ghanima, primarily for her own protection. Leto knew that if he were to reveal the full extent of the Golden Path, that out of her love for her brother, Ghanima might try to prevent him from making it a reality.

Ghanima was the target of an assassination attempt orchestrated by the Princess Wensicia Corrino. The plot involved providing Ghanima and her brother with a royal gift of fine cloaks. The cloaks had transmitters in them that would attract laza tigers when they would next be in the desert. After this assassination attempt, Leto knew that if Ghanima believed Leto to be dead, that this may make the conspirators reveal themselves. Ghanima therefore agreed to Leto's request of being conditioned to believe him dead, thus leaving him free to take the next steps on the Golden Path alone.

Fearing for Ghanima's safety, Irulan placed her step-daughter under Stilgar's protection, where she largely remained until Leto reappeared several months later. Having revealed himself, the transformed Leto quickly took over leadership of the Empire from Alia, who had by that time fallen totally under the control of the late Baron Vladimir Harkonnen's personality.

Leto controversially decided to marry his sister, making Ghanima Empress and consolidating House Atreides' hold on the Imperial Throne. The pair never consummated the marriage. The decision was political, born out of a desire to prevent another of the Great Houses from marrying his sister and thereby attempting to wrest control from him.

However, for the good of the Golden Path, Leto made Farad'n Corrino, the heir of House Corrino, Ghanima's official and exclusive consort. From this union, Leto wrested control of the Bene Gesserit breeding program, and Atreides, Harkonnen and Corrino genes were seeded throughout the Empire through Ghanima and Farad'n's descendants. As Leto had planned, these descendants became countless over the next few thousand years, and formed a strong genetic basis for such traumatic historical events as the Scattering. Among Ghanima and Farad'n's descendants were Siona Atreides. 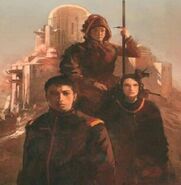