Leto II founded the Fish Speakers to enforce his rule over the known universe. He found the existing Fremen and Sardaukar forces unsuitable to his needs. Leto believed that male dominated military forces were essentially predatory and would turn against the civilian population in the absence of an external enemy, whereas a female one would tame and calm. He also needed a reliable religious organization to enforce what came to be known as Leto's Peace to ensure the unfolding of the Golden Path.

With the exception of the nomadic Amazons who legend described as once ruling part of the Asian steppes of the Old Earth, the Fish Speakers were just about the only effective all-female army known throughout the history of the Dune universe. They were also, in terms of worlds ruled and historical longevity, the most effective military force ever known, though males were still employed as house guards.

The Fish Speakers were not only an army but also served as Leto's bureaucracy: pages, courtiers, archivists and teachers; some were priestesses, serving as judge, jury, executioner in one. Leto also used them as secret agents and assassins, apart from the official Fish Speaker Guard and elite units as the Imperial Guard. Errant Fish Speakers were isolated and served as Death Commandos or Berserkers. Men originally only served as advisory capacity and only later became Fish speaker auxiliaries, which was generally seen as a sign of the degeneration of the original Fish Speaker schools. The Fish Speaker Guard used not only stun clubs, Elacca whips, long knives, silver-blades, and stun grenades but also heavy weapons, while Lasguns were only fielded by specially trained forces. In addition to infantry, the Fish Speakers also used aircraft, generally large ornithopters, but also smaller guardships. To support infantry, the Fish Speakers relied on suspensor-sleds, armored Groundcars were uncommon in Leto's reign, but common in later times. 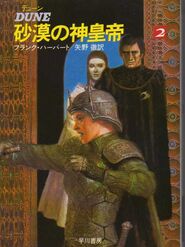 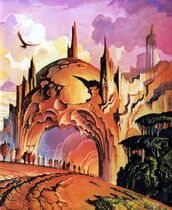 Luli and the woman with the Cibus Mask - Illustration by Klaus D. Schiemann

After Leto II's death, control of the Fish Speakers passed to the ghola of Duncan Idaho and Siona Atreides. Their influence had significantly waned in comparison to the Bene Tleilax, Ixians and the Bene Gesserit. A Fish Speaker council controlled some areas of space that used to fall under Leto's rule. By this time, however, the Fish Speakers had also incorporated men into their ranks, and held little in common with the force maintained by Leto II in terms of philosophy or practices.

Also by this time, many of the leaders of the Fish Speakers had been replaced with Tleilaxu Face Dancers, essentially making the Fish Speakers, and the realms under their domain, puppets of the Tleilaxu.