This article is based largely on the Wikipedia article on Feyd-Rautha Harkonnen.

Siridar-Baron Feyd-Rautha Harkonnen (born Feyd-Rautha Rabban; October 10174 AG - December 10193 AG) was the last Baron of House Harkonnen, although he held the title only briefly towards the end of the Desert War after the death of his uncle, Baron Vladimir Harkonnen, in whose plans to gain power Feyd had figured heavily, before being killed in a duel by Paul Atreides shortly after the Battle of Arrakeen. While still alive, the Baron favored the intelligent and charismatic Feyd-Rautha over Feyd's older and dimmer brother Glossu "Beast" Rabban, Count of Lankiveil, and so chose him as his heir.

Born Feyd-Rautha Rabban on Lankiveil as the son of Abulurd Rabban and his wife Emmi, Feyd was his father's hope for a son who would not have to inherit the dishonour of the name of Harkonnen, and a worthy heir, instead of his older, more brutal son, Glossu.

Feyd was named in honour after his maternal grandfather, Rautha Rabban, who had been killed at Glossu's orders. When the Baron heard of this he decided to take Feyd from his father to raise him on Giedi Prime as a possible heir of his own. This was when his surname was changed to Harkonnen. Over time, the Baron came to favour Feyd more than his older brother.

Role in the Breeding Program[]

Feyd, like Paul Atreides, was also the product of a centuries-long breeding program organized by the Bene Gesserit; who planned their own marital alliance, joining a Harkonnen son to an Atreides daughter, uniting the powerful houses, ending their feud, and assuring their offspring would have a high probability of becoming the Kwisatz Haderach.

For this reason, Jessica Atreides' decision to defy the sisterhood and to produce an Atreides son, Paul, established an irreconcilable tension between Feyd and Paul as the scions of their bitterly opposed noble houses. The risk of one or both of these young men being killed, destroying thousands of years of genetic engineering, was so great that the Bene Gesserit sent an envoy, Margot Fenring to seduce Feyd and conceive a child, salvaging his genetic material. During the seduction, she used a form of hypnotic suggestion (Voice) to make Feyd vulnerable to a command which, upon a specific word (most commonly 'Uroshnor') would cause complete muscle paralysis, a technique sometimes used on individuals who were considered highly dangerous.

The Baron planned a strategic marital alliance, hoping to marry Feyd to Princess Irulan Corrino, the eldest daughter of the Emperor Shaddam IV, and giving the Harkonnens influence or control over the throne. To promote Feyd's power, he was to be installed as ruler of Arrakis after a period of tyrannical misrule by Glossu Rabban, making Feyd appear to be the savior of the people.

Feyd's ambition and impatience to inherit the Baron's title and power allowed him to be manipulated by Thufir Hawat, a counselor to the Atreides who was captured by the Baron. Both the Baron and Feyd were nearly assassinated as a result of Hawat's machinations.

Feyd was famed for his prowess in single combat, and his willingness to break the formal rules of kanly that governed this type of challenge, by using a hidden poison spur in his fighting outfit. He nearly succeeded in killing Paul in ritualized single combat, while Paul was deciding whether to try the paralysis command and owe the Bene Gesserit his victory or whether to risk his life against Feyd in a "fair" fight. 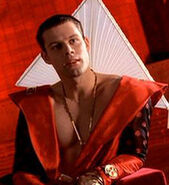 Matt Keeslar as Feyd-Ratha in the 2000 TV Miniseries 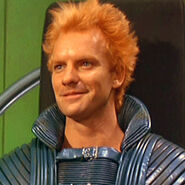 Sting as Feyd-Rautha Harkonnen in the 1984 Movie 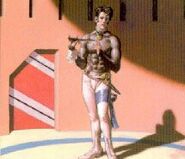 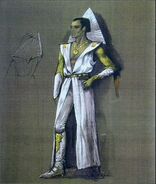 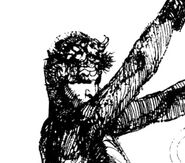