Dune (Alexandro Jodorowsky) was a Canclled movie proposed by Chilean-French cult film director and artist Alejandro Jodorowsky, and produced by French businessman Michel Seydoux, in 1974. This production became the subject of a documentary released in 2013, Jorodowsky's Dune.

The film rights for an adaptation of Dune had been originally purchased by Apjac International (APJ) in 1971, but film producer Arthur P. Jacobs, who was the head of Apjac, died before production could start. In December 1974, a French consortium led by Jean-Paul Gibon purchased the film rights from APJ, with Jodorowski set to direct. In 1975, Jodorowsky planned to film the story as a 10-hour feature.

Although it is widely believed that Alejandro Jodorowsky wanted to adapt Dune without reading the original novel, he did start reading the book after entering production, according to director Frank Pavich. [1] The Chilean-French filmmaker has stated that he "did not want to respect the novel", but to "recreate" it, since "Dune did not belong to Herbert as Don Quixote did not belong to Cervantes, nor Edipo with Esquilo".[2]

Still according to Pavich, Jodorowsky wanted to film Dune in Algeria, with the Algerian army as extras. Frank Herbert described the extensive script as having "the size of a phone book".[3] In the documentary regarding the canceled movie, producer Michel Seydoux comments:

You needed a touch of madness to do it. You can't have a masterpiece without madness. Pink Floyd? Dali or Orson Welles or others! Maybe Dune had too much madness? But a movie that doesn't have a bit of madness is not going to conquer the whole world.

One of the artists recruited to collaborate on the movie was Jean Giraud (Moebius), a French illustrator who created and also wrote and drew for Metal Hurlant magazine. Moebius created over 3000 storyboard ilutstrations based on the script, which included Paul being murdered and transforming into a sentient planet.[4]

Jodorowsky envisioned the Emperor as an insane man who would "live in symbiosis with a robot identical to him. The resemblance is so perfect that the citizens never know if they are opposite the man or the machine". The film would end with the wife of Count Fenring slitting Paul's throat and his conscience expanding itself onto the other Atreides and Fremen, revealing, "I am the collective man. He who shows the way".

Jodorowsky's adaptation of Dune was set to star his own 12-year-old son Brontis Jodorowsky in the lead role of Paul Atreides. Other names included:

Brontis Jodorowsky went into two years of intense martial arts training to prepare for the role of Paul.[5] Salvador Dalí was cast and demanded to be paid $100,000 per hour; Jodorowsky agreed, but tailored Dalí's part to be filmed in one hour, drafting plans for other scenes of the emperor to use a mechanical mannequin as substitute for Dalí. According to H. R. Giger, Dalí was "later invited to leave the film because of his pro-Franco statements".

Actress Charlotte Rampling was Jodorowsky's favorite for the role Jessica, but she turned it down due to a scene involving 2,000 extras defecating at once. After reading the scene, she dropped out stating, “I can’t be in a movie where there’s 2,000 extras defecating on screen! I need to be in a movie that people are actually going to see! Who the hell is going to see this movie?”.[6] This was reportedly a "great disappointment" for Jodorowsky. Rampling would portray the Reverend Mother in the 2021 adaptation.

Jodorowsky met actor David Carradine at a hotel to discuss his casting as Leto Atreides and, after Carradine swallowed a bottle of Vitamin E pills all at once, the director reportedly told him, "You are the person I am searching for".[7] Udo Kier recalled that he was also considered to play Feyd-Hautha Harkonnen in a 2021 interview. [8]

Mick Jagger is one of two famous music artists linked to the role of Feyd-Hautha, as Sting portrayed this character in the 1984 movie.

It was at first proposed to score the film with original music by Karlheinz Stockhausen, Henry Cow, and Magma; later on, the soundtrack was to be provided by Pink Floyd. The 2021 adaptation features a cover of the song "Eclipse", in reference to this fact.

Regarding Chris Foss' concepts for the ships and vehicles, Jodorowsky wanted to distance its designs from the typical man-made spacecraft. He stated, "man will conquer space mounted on Foss' spaceships, never in NASA's concentration camps of the spirit". [9] Foss had previously worked on the covers for Isaac Asimov's Foundation,[10] another literary piece focusing on an intergalactic Imperium and considered seminal to the science fiction genre, along with Dune.

Among the reasons that caused this production to collapse is its limited budget, from which 2 million were spent solely during pre-production; and the final draft of the script, which would result in a 14-hour-movie, while Hollywood did not want the film to exceed two hours. Furthermore, the industry was still untrustful of the commercial viability of movies with the proportions of Dune, which caused the director to shut down production.

In Jodorowsky's own words, the project was "sabotaged in Hollywood. It was French and not American. Its message was not 'enough Hollywood'. There were intrigues, plundering. The story-board circulated among all the large studios".[11]

Aspects such as Jodorowsky's ambitious ideas, intended cast and the names involved during production would make the failed movie notorious over the years. The documentary Jodorowsky's Dune was released in 2013, achieving critical acclaim.

After production collapsed, Dan O'Bannon was left broke, homeless, and dependent on friends for his survival. While living at his friend Ronnie Shusetts's house in Los Angeles, O'Bannon wrote the first draft of Alien (1979).[12][13] Since O'Bannon wanted the artists he had met while working on Jodorowsky's Dune to design Alien from the start, this movie and subsequent franchise featured some of the H. R. Giger designs originally conceived for Dune, most notably the Harkonnen castle.[14] 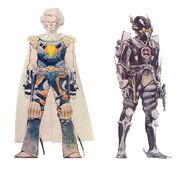 H. R. Giger's concept for the Harkonnen lair. This design was notably reused in the "Alien" franchise.