Dune: Spice Wars is a real time strategy game developed by Shiro Games and published by Funcom and Shiro Games. The game is based on the critically acclaimed universe created by Frank Herbert and the subsequent movie adaptations. It was released on Steam for Microsoft Windows on April 26, 2022.

A real-time strategy game with 4X elements, from the developers of the critically acclaimed Northgard. Set in Frank Herbert's groundbreaking Dune universe, you must lead your faction and battle for control and dominance over the harsh desert planet of Arrakis.[1]

A variety of factions can be controlled, including House Atreides and House Harkonnen. Victory can be obtained through a manner of methods, including subterfuge, politics, growth of economy, or straight-up warfare. The game boasts 4X dynamics in real-time.[2]

Developers Shiro Games later announced that the game would feature other groups such as the Spacing Guild and the Fremen; the game is largely based on "groups" and factions rather than houses, but developers confirmed that a variety of houses and non-houses would appear in the game[3]. 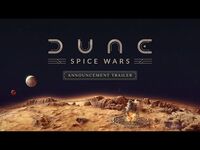