A crysknife was a knife whose blade was made from the tooth of a dead sandworm of Arrakis. It was the weapon of choice for the Fremen, the natives of Arrakis.  It was a curved and double-edged like a kindjal, and 20 centimeters long, milky white in color and iridescent, and had a black handle with deep finger ridges separated from the blade by a slim round ring instead of a shearing-guard. The tip of a crysknife was also commonly poisoned, with an unnamed poison residing where the nerve of the tooth used to be. This poison is quick-acting and powerful as shown with the killing of the Laza tigers by Leto II and Ghanima.

To the Fremen, the crysknife was sacred, and they maintained much tradition around it. If it was drawn, it could not be resheathed until it had drawn blood. Moreover, the blade was not allowed to be seen by those considered to be outsiders by the tribe; otherwise they would have to die by it, or be "cleansed" in an elaborate ritual.

The sharpness of a crysknife was unparalleled. It was usually perceived to glow with a faint light. They averaged 20 cm in length.

Blades were considered a necessity on Arrakis. This was because neither shields nor Lasguns could be used in the Arrakis desert, due to the Holtzman field attracting sandworms.

Paul Administers the Oath of the Fedaykin (The Illustrated Dune, art by John Schoenherr) 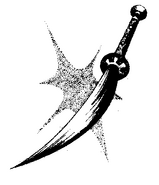 In Dune: House Atreides "fixing a crysknife" is explained as "keyed to the body of the owner so it would dissolve upon his death" which contradicts the above definition.