Chapterhouse has been the same planet for more than 1500 years, which means "temporary" headquarters is somewhat of a loose term.

This current planet had been used as the Bene Gesserit headquarters from approximately the time of Leto II's death onward. They utilized No-ships in a defensive, encapsulating perimeter around the planet to mask its existence from prescient individuals who may be searching for the location of their headquarters, such as the Honored Matres.

The planet was largely an average photosynthesis range, maintained through the use of Weather Satellites. However, after the planet Rakis was destroyed by the Honored Matres, the Bene Gesserit turned much of Chapterhouse into desert, so that the last surviving sandworm could survive on the planet. This was done so that the spice melange would continue to be produced, which became all the more vital since the Bene Tleilax, the largest producers of melange were also destroyed by the Honored Matres.

Chapterhouse was also where the Bene Gesserit maintained their main library. However, because the loss of information and historic records was far too great a risk, the majority of information kept by the Sisterhood was maintained through Other Memory. 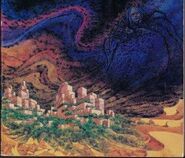 Retrieved from "https://dune.fandom.com/wiki/Chapterhouse?oldid=40491"
Community content is available under CC-BY-SA unless otherwise noted.