Chani was born on Arrakis, the daughter of the half-Fremen planetologist Liet Kynes and his full-Fremen wife. She gradually developed into a formidable fighter, and by the time of her father's death was serving under naib Stilgar.

Introduction and Life with Paul[]

When Paul and his mother Jessica escaped from Arrakeen after the invasion of House Harkonnen they quickly found themselves in the deep desert of Arrakis. There, while sheltering in a cave system from a sandworm they were intercepted by a group of traveling Fremen, which included Chani.

Her introduction to Paul came during a tense stand-off. Chani was familiar to the Atreides heir because of her appearance in his prescient visions prior to his arrival on Arrakis. But to her Paul was initially a stranger.

After the integration of Paul and Jessica into the Fremen by Stilgar, Chani began her long-lasting love affair with the young Duke, and eventually bore him a son, Leto. However, their first born was murdered by a House Corrino raiding party while Paul, Chani and Jessica were away visiting another sietch.

After the defeat of House Harkonnen and House Corrino on Arrakis, and Paul's subsequent ascent to Emperor and marriage to Irulan Corrino, Chani became his official concubine and remained his exclusive partner.

Twelve years later, when Chani became pregnant once again, Irulan sought to usurp her and become the bearer of Paul's children. She found support with the Bene Gesserit, who feared the impact of Chani's largely-unknown bloodline on their breeding program.

However, Irulan's attempts to terminate Chani's pregnancy through drugs failed. After a traumatic pregnancy, (the pregnancy was accelerated by Spice, taking only five months instead of nine) Chani gave birth to twins, who Paul named Leto and Ghanima.

Irulan's treachery did, however, bring a secondary result. Chani died shortly after giving birth to the twins, due to complications stemming from the drugs Paul's titular wife had been surreptitiously feeding her.

The Tleilaxu Scytale offered immediately to resurrect Chani in an Axlotl Tank. Yet despite the temptation, Paul refused, knowing the impact such an event would have on the Golden Path.

Chani was described as skinny with an elfin face and had pure, dark blue eyes with no white in them. She had long tawny-red hair.

Sean Young as Chani in the 1984 dune movie

Chani in the Dune (video game)

Barbora Kodetová as Chani in the Dune miniseries 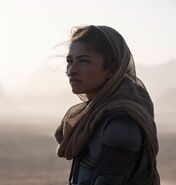