Carthag was the capital of the planet Arrakis under the rule of House Harkonnen.

Carthag was erected by House Harkonnen upon their arrival as their headquarters when Spacing Guild manipulations had given them Arrakis as a quasi-fief to govern. The city was built northeast of the Shield Wall with the rapidity of inexhaustible human labor, with blocky buildings constructed of substandard materials for ostentatious purposes or functionality. Pardot Kynes noticed its lack of finesse, attention to detail or elegance, comparing it with a pustule on the surface of the planet.

Upon the change of fief ordered by the Padishah Emperor Shaddam IV, House Atreides took control of Arrakis in 10,191AG. Under the Atreides leader, the Duke Leto, the capital moved to the city of Arrakeen, which was approximately two hundred kilometres south west of Carthag.

Of the two cities, Carthag was larger, newer, and more densely populated. Duke Leto had assessed that Arrakeen would be easier to defend if attacked, and thus made it the planet's capital. Moreover, Leto had theorised that, because Carthag was more densely populated, it was likely to have a greater number of Harkonnen agents that could potentially subvert Atreides rule.

Carthag took its name from the ancient Terran city of Carthage. 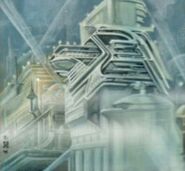 Dune regency in the Dune Ccg 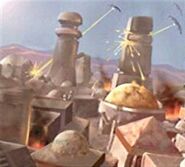