A Carryall was a large winged, planet-bound ship that handled spice mining teams on Arrakis. They are usually piloted by a crew of six spice miners or "dunemen", and could carry spice harvesters from one area to another.

Carryalls were a vital part of spice production. Spotters would be used to locate a spice blow, while the carryall would lift the harvesters from the surface and release them on the spice blows for mining. Moreover, since sandworms attacked all rhythmic vibrations, carryalls were required to lift the harvesters to safety when a worm attacked, a constant threat as harvesters generated considerable vibrations. Typically, the spotters would be used to locate wormsign, electrical charges and ripples in the sand indicating a worm was on its way.

When House Atreides took control of Arrakis, there were just over a thousand carryalls in the equipment inventory. The vast majority were in dire need of repair, and it was only about a third of how many required to cover all the harvesters.

At one point, a party including the Duke Leto Atreides was nearly killed when a worm attacked a harvester the party was observing. A Harkonnen agent among the crew had overpowered the others and tried to offload it to spice smugglers. The smugglers in question belonged to Esmar Tuek, and had turned over the man and carryall to Atreides forces. This gesture on the part of Tuek earned the gratitude of the Lady Jessica.

Carryall as depicted in the Dune Encyclopedia

Carryall as depicted in Dune 2

Carryall as depicted in the 1984 Dune Movie

Carryall and Harvesters as depicted in the Dune CCG 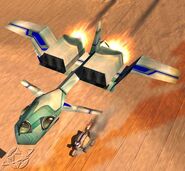 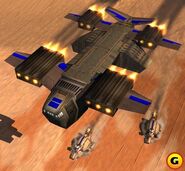 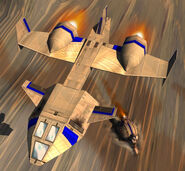 Advanced Carryall - Emperor:Battle for Dune PC game
Add a photo to this gallery

Retrieved from "https://dune.fandom.com/wiki/Carryall?oldid=38019"
Community content is available under CC-BY-SA unless otherwise noted.