The Bene Gesserit are a powerful and ancient order of women whose objectives and actions formed a critical element in the evolution of humanity and many of the major plot developments.

The Bene Gesserit were believed to have been officially established by Raquella Berto-Anirul, the granddaughter of Vorian Atreides. After surviving the Rossak epidemic - a mutated version of the deadly Omnius Scourge - and an assassination attempt on Rossak by Supreme Sorceress Ticia Cenva, her cellular chemistry was converted and the memories of countless female ancestors were awakened. She quickly emerged as the leader of the decimated Sorceresses of Rossak, and began their path of genetic breeding.[2]

The original Sisterhood of Rossak had existed for over 80 years with Raquella Berto-Anirul being the only Reverend Mother in existence. All other attempts at creating Reverend Mothers resulted in failures, often fatal for the sister attempting to undergo the transformation. Of the great Sorceresses of Rossak, very few remained after many of them gave their lives during the Jihad and those killed by the epidemic. The first of the new Reverend Mothers was, in fact, Raquella's own granddaughter Dorotea. However, Dorotea's views on the Sisterhood differed radically with those of her grandmother, and many of the following Reverend Mothers were those who agreed with Dorotea's views. This schism and the discovery of an attempt by Raquella to have Emperor Salvador Corrino sterilized in order to promote his brother's bloodline resulted in the shutdown of the Sisterhood of Rossak by an Imperial decree. A few of the sisters, including Dorotea were taken back to Salusa Secundus to continue their service in the Imperial court, but the rest were sent to their planets of origin. During these events, Imperial soldiers slaughtered the remaining Sorceresses and all sister-mentats. Dorotea's faction was allowed to continue their studies but forbidden to read the Azhar Book and continue their breeding program (the latter of which Dorotea had opposed in the first place).

The historic first sanctuary of the Sisterhood had been erected on Wallach IX after Josef Venport was convinced by his wife Cioba, Karee Marques's granddaughter, to offer Raquella Berto-Anirul and 25 other sisters Venhold's protection. Wallach IX was chosen for its isolation from the rest of known space, after it had been bombarded with atomics during the Butlerian Jihad. The sprawling Mother School complex was the base of Bene Gesserit operations throughout the Imperium.[3]

Objectives of the Bene Gesserit

The primary objective of the Bene Gesserit was to attain further power and influence and help to direct humanity along a path of insight and stability. Up until the emergence of Leto Atreides II, the anticipated means of reaching this goal was through the Kwisatz Haderach - the one who can be all places at once (a male Bene Gesserit "Reverend Mother Superior", a "super-being", and ultimately a Messiah-figure to serve the Missionaria Protectiva), and the ultimate objective of their age-old breeding program. The triumph of their plan was supposed to occur when the daughter of Leto Atreides I bred with Feyd Rautha Harkonnen.

However, their plans were thrown into turmoil by Jessica Atreides, when she consciously gave Leto Atreides I a son (Paul Atreides) instead of a daughter. Paul was assumed the Kwisatz Haderach, and, much to the dismay of the Bene Gesserit, arrived a generation too soon. Whether the order could have fully controlled the Kwisatz Haderach as they hoped remains debatable.

The Bene Gesserit’s plans are further disrupted when Paul bred with Chani, the Fremen daughter of Liet Kynes, stirring up rogue and unpredictable genetic traits. Their son, Leto Atreides II, and his actions as the God-Emperor, radically altered the long-term destiny of the Bene Gesserit: their primary goal became the re-establishment of their power-base, an intention that was severely tested by the emergence of the Honored Matres.

This objective was largely met, thanks to the merger of the Bene Gesserit and the Honored Matres but it remained clear that their fate is still very much out of their own hands.

Credo of the Bene Gesserit

Structure of the Bene Gesserit

Kwisatz Mother: possessed the strongest tie to the other voices, in charge of the program to breed the Kwisatz Haderach; She solely directed the breeding program.

Truthsayer: taught the ways to invoke the truth trance.

The Bene Gesserit schools were designed to maximise the physical and mental potential of humanity, especially females. As a result, Bene Gesserit adepts possessed abilities that could not be rivalled by anyone else in the known universe.

Bene Gesserit are able to control their own fertility, choosing when to get pregnant and the gender of their child in order to produce children when and where the order wishes in order to meet with the Bene Gesserits breeding program.

Emergence as a Universal Power

"She nodded. "We have two chief survivors of those ancient schools: the Bene Gesserit and the Spacing Guild. The Guild, so we think, emphasizes almost pure mathematics. Bene Gesserit performs another function." "Politics!" he said. "
―Reverend Mother Gaius Helen Mohiam[src]

For millennia, the Bene Gesserit Sisterhood chose to exercise its power by acting in the background of imperial politics. Through their breeding program, their placement of agents in the imperial court and Great Houses, and their provision of services such as the training of noble females, mediation in disputes, and overseers of negotiations, the Bene Gesserit carved out a significant niche in the structure of the Imperium. They were also silent partners in CHOAM along with the Bene Tleilax.

During the Return of the Honored Matres, the Bene Gesserit Reverend Mother Superior Darwi Odrade, a descendant of Paul, realized only through the Sisterhood combining with the Matres could both organizations survive into the future. First, Odrade trained her captive Murbella, a captured Matre, in the ways of the sisters. Then she and a ghola of Miles Teg, set up a plan to attack the Honored Matre base on the Guild-world of Junction. As Odrade was killed in the ensuing battle, Murbella also killed the Honored Matre leader, Logno. Murbella then decided to unite both groups into the New Sisterhood.

There was immediate resistance to the concept of the merger, as Sheeana, a rebel Reverend Mother, escaped from Chapterhouse in a No-ship, with a hundred of her fellow sisters; taking a few sandworms with them. They escaped with Miles Teg and Duncan Idaho, who had their own reasons for leaving; but Sheeana's group's intention was one to set up a "pure" Gesserit outpost, far away from civilization. As the no-ship fold-spaced throughout the cosmos in an attempt to escape the tachyon net of the mysterious elderly couple, Daniel and Marty, the sisters aboard the no-ship held true to their training and structure.

When needed, Sheeana and her assistants created gholas of yesteryear, as they saw fit. When they reached the world of Qelso, they witnessed first hand the drought created by earlier terra-forming attempts of colonizing sisters, who had introduced sandworms to the planet decades earlier. 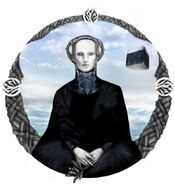 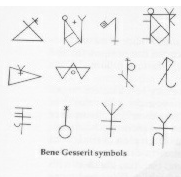 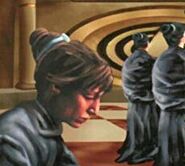 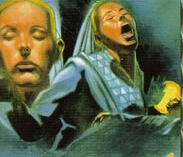 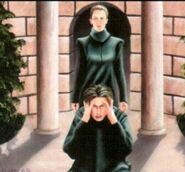 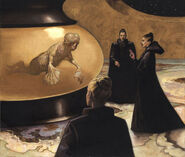 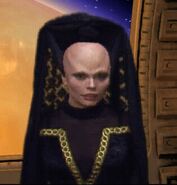 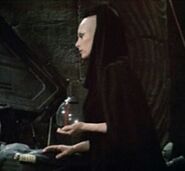 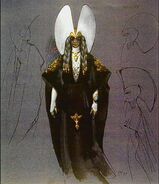 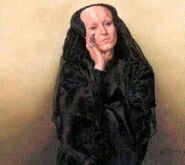 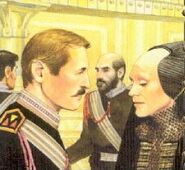 thumb|Imperial Courtiers as depicted in the Dune CCG 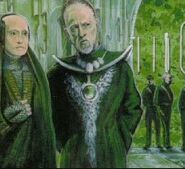 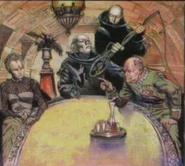 Frank Herbert may have chosen the name "Bene Gesserit" with a very concrete meaning in mind, but the name is at least somewhat ambiguous, perhaps intentionally.

On one level, "Bene Gesserit" is an unadulterated Latin sentence (or motto). Yet because of the way Latin works, it is difficult to translate without more context. The verb gero, gerere (of which gesserit is a form) can mean a wide variety of seemingly unconnected things: bear, manage, wear. Translations of the whole expression can mean "[he/she/it] will have born/managed/worn [something] well," or then also more idiomatically it can mean thigs like "[he/she/it] shall have behaved well." An interpretation having something to do with bearing children would suitably match the breeding mission of the Bene Gesserit, but the phrase could suggest many other things as well.

The name can also be interpreted as a Hebrew derivative. "B'nei" (בני) means 'children of' (e.g. Bene Tleilax) and "Gesher" (גשר) means 'bridge.' Another interpretation could be "Gesserit" as derived from "jesherun," or "just," meaning "Chidren of the Just."

Brian Herbert speculates that "Gesserit" is most likely a derivative of the word "Jesuit", an order of priests still active today. "Jesuit" also has the connotation of someone given to intrigue or mystique. Therefore the name "Bene Gesserit" can be rationally surmised to mean a society of religious peoples who, while being secretive or clandestine, also function for the good of the society they inhabit.

Retrieved from "https://dune.fandom.com/wiki/Bene_Gesserit?oldid=36383"
Community content is available under CC-BY-SA unless otherwise noted.