Gurney Halleck owned a baliset, and often played it while reciting proverbs or singing folk songs for entertainment. Often he would entertain family members of House Atreides before the attack on Arrakis. 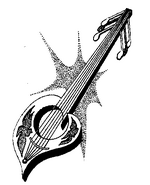 A baliset (The Dune Encyclopedia, art by Matt Howarth)

In the 1984 movie, a baliset was constructed from a Chapman Stick. The short cue seen played by Halleck is actually a part of the track Back Yard played by Emmett Chapman himself. The scene was cut in the final release and can be seen only in the extended versions.

Notably, the movie version of the instrument features an electric fan at the bottom.

In the Frank Herbert's Dune miniseries, the baliset resembles a renaissance-era lute, with the pegbox bent back almost 90º.