Arvon also called Muad'dib is the smaller of the two satellites of Arrakis.

It orbits Arrakis in less than one-fourth the time required for Krelln. Having a diameter larger than Krelln, total eclipses of Krelln occur every 547.2 days.

The physical characteristics of Arvon differ from those of Krelln. Large amounts of subterranean water ice and frozen carbon dioxide result in its small density.

Cratering is evident, but is less pronounced due to the more fluid crystal structure. There is no measurable magnetic field. No evidence of tectonic activity has been detected by Arrakian scientists. It is geologically inert. 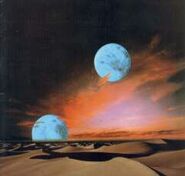 Retrieved from "https://dune.fandom.com/wiki/Arvon?oldid=32424"
Community content is available under CC-BY-SA unless otherwise noted.