Arrakis, also known as "Dune", and later "Rakis" after the fall of God Emperor Leto Atreides II, is a harsh desert planet located on the far edge of the Old Imperium in the Canopus star system. It later became the Imperium's center under Muad'Dib's empire. It was the original and for a long time sole source of the Spice Melange, which was vital for space travel.

Arrakis was located far from the major populated worlds and their trade routes. It was orbited by two moons: the first and larger of these bore a formation that looked like a human fist; the second had a formation that resembled a kangaroo mouse.

The fight for survival on the harsh world had long dominated the Fremen's cultural identity. The brutal environment of Arrakis necessitated frugal use of energy and resources, especially water. Also, their history with cultural persecution mandated the need for combat knowledge. These two aspects saw them emerge as efficient and hardy warriors, who used their skills and the environment of Arrakis to fend off offworld opponents who often possess far superior technology and formal training.

The Fremen typically lived in patriarchal tribes, known as sietches, which were led by a naib. Each sietch resides within one of the many rocky formations that dot the sands of Arrakis. Collectively, all Fremen belonged to the Ichwan Bedwine, or broad brotherhood.

Other human settlers included the graben population in the urbanized areas. This population consisted of traders and offworlders who tried to make their living through trading water or spice. The promise of riches through the sale of water to the Fremen and the sale of the spice melange to other worlds brought many people to the more populous areas of the planet.

Arrakis also saw the peoples of Great Houses populate the planet. As a siridar fief of the Imperium, whichever Great House had possession of this fief would typically maintain a large population that included armies, administrative staff, family members, household staff, a spy network, and richece.

After his successful invasion of Arrakis, the Baron mentions to Nefud that there are 5,000,000 people living on Arrakis. By this he means the people of the towns and villages. He is later stunned to hear from Thufir Hawat that the Fremen account for at least an additional 10,000,000. Given a total population of 15,000,000 on a planet as harsh as Arrakis.

The atmosphere consisted of 75.4% nitrogen, 23% oxygen[1] and negligible amounts of trace gases; given the abundance of oxygen, the atmosphere allowed human beings to live on the planet without respiratory equipment. The production method of atmospheric oxygen sufficient to sustain limited biological life is through sandworm metabolism, which acts like an oxygen-producing factory.

Vast reserves of water were located deep within the mountains of the planet, as well as within countless sandtrout. Small amounts of water vapor existed in the atmosphere and were harvested via windtraps.

The northern pole of the planet sat on a large plate of bedrock and was ringed by mountain ranges. Thus it was protected from sandworm incursion, until the Fremen, led by Paul Atreides, used atomics to destroy a large section of the Shield Wall shortly before he proclaimed himself emperor.

This geography, combined with the milder climate, made human habitation at the pole more comfortable and explained the presence of the capital city Arrakeen.

Little native life survived on Arrakis, owing to its scorching heat and dry climate. The various lifeforms that did endure were eclipsed by the sandworms, which roamed the deep deserts of the planet. The sandworms played an important role in the production of melange, and they aggressively protected their desert territory from humans and other sandworms alike.

The Fremen, traditionalist human clans, also eked out a life on the planet, existing in the caves of rocky outcrops and mountain ranges that broke up the planetwide desert.

Other lifeforms on Arrakis included sandtrout (which interplays heavily with the sandworm), and the kangaroo mouse, known to the Fremen as "Muad'Dib." Some forms of flora existed on the planet, including the creosote bush. Various birds and bats existed in the ecosystems of the planet. Some of these were domesticated by the Fremen.

Specifically, the kinds of life forms that existed on Arrakis included the following:

Various animals were part of the ecosystem, including the following:

Before the discovery of the spice melange on the planet, Arrakis was of little tactical, biological, or geological interest to the inhabitants of the Old Empire. When Yansuph Ashkoko discovered it's geriatric effects however, it achieved a little more importance. After the Butlerian Jihad, the powerful effects of the spice, especially with regard to space travel, quickly made it an essential resource and a focal point for the emerging Corrino Empire. The discovery of the spice melange noticeably increased Arrakis's importance, until by the time of Paul Atreides it had become a critical component in the galaxy.

Previous experiments had seen sandworms die shortly after they were transplanted from Arrakis to another world, regardless of how faithful a reproduction of their ecosystem was made. As a result, while Arrakis was a fief of House Harkonnen, the Corrinos sent their Imperial Planetologist Pardot Kynes to analyze the planet's ecosystem. Kynes' analysis of Arrakis convinced him that the planet was once a lush and fertile world. He believed that through careful and multigenerational planning, Arrakis could once again become a paradise. The Fremen, enchanted by Kynes's stories of large bodies of water, greenery, and mild temperatures not requiring stillsuits, followed him with fervor. Kynes became so fascinated by the planet and its people that he married into a Fremen tribe, eventually being absorbed into their culture and coming to be known as a leader among the Fremen. He saw so much potential in the planet and its people that he sought to hide its secrets from the emperor. This practice led eventually to Kynes's death, but not before leaving a legacy and a vision for the Fremen people.

Ascension of House Atreides and the God Emperor[]

In 10,191 A.G., House Atreides arrived on Arrakis and took over control of the planet and spice production. By this time, the planet had for some years been under the brutal control of Atreides enemies House Harkonnen, who managed spice mining operations on behalf of Padishah Emperor Shaddam IV. The Atreides rule was cut short, however, through a betrayal as part of a conspiracy between Harkonnen and Imperial forces.

House Atreides went into hiding, but after seeking refuge with the Fremen quickly became their leaders through their inherent ability to command loyalty and through their promise that Kynes's vision would be realized through their rule. Three years later, Paul Atreides, under the Fremen name of Muad'Dib, using Atreides family atomics, created a gap in the Shield Wall that had protected Arrakeen. Riding into the city on sandworms, the Fremen defeated Harkonnen and Corrino forces, and Paul Atreides declared victory and ascended to the Golden Lion Throne. Arrakis became the new seat of power for both the Empire and the religious jihad that Paul unleashed upon the known universe.

Eventually, Paul's limited interpretation of the Golden Path strategy led to the terraforming of the planet, carried out by Paul's son Leto Atreides II, the long-lived God-Emperor. Over several thousand years, Arrakis was transformed into a green and temperate world much more habitable to humans, just as Kynes had hoped. Ultimately, however, the new ecology was dangerous to the giant sandworms, which nearly became extinct under Leto II's rule. During this time, new mountain ranges, forests, and rivers came into existence. Offworld animals were introduced and took root on the planet. Only Leto's Sareer remained evidence that Arrakis was once a desert planet.

After some 3,500 years of rule, Leto II died while crossing the Idaho River after the Guardian Wall of the Sareer opened. Leto fell into the river, and his worm-body was destroyed by the water, which was toxic to him. His body decomposed into sandtrout that absorbed water, eventually re-creating the conditions required for the sandworms to appear. Over the next 1,500 years, under the biological terraforming effect of the sandtrout/sandworm cycle, Arrakis gradually returned to being a desert. Also, over long millennia, many names for places had become shortened. Arrakis eventually became known as Rakis, while the city of Arrakeen became known simply as Keen. After Leto's death, Leto's Fish Speakers, the Rakian Priesthood, and the Bene Gesserit took control of the planet.

Because most of humanity had gone out into The Scattering, the return of the Honored Matres 1,500 years later caused the most fear about Rakis. The greater portion of humanity of the Scattering had been weaned of any need for melange, now able to safely perform foldspace journeys through the use of No-ships and Navigation machines with no requirement for Spice-reliant Guild Navigators. The Matres in particular saw eliminating spice as a way to break the power brokers, the Bene Gesserit Sisterhood and the Tleilaxu (the only remaining users of Spice Melange), who had stayed behind in the Empire.

In an attempt to destroy the center of spice production, the Honored Matres eventually attacked the planet with their spaceborne incinerating Weapon, an action that destroyed all biological life and rendered parts of the planet's surface akin to fused glass. However, their efforts did not totally succeed, and the Bene Gesserit managed to escape with a ghola of Duncan Idaho; Sheeana; their leader, Darwi Odrade; and a single sandworm to Chapterhouse. The sandworm managed to survive the transplant and revived hopes in the Bene Gesserit to re-create Arrakis, or "Dune," on other planets through the Known Universe.

Upon arriving at the secret Gesserit capital planet of Chapterhouse, Odrade had the worm drowned and had some of its sandtrout placed into the soil. Slowly, the world was terraformed into a planet similar to Dune, with a sandworm spice cycle. 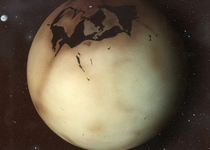 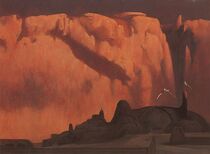 Keep and Palace in Arrakeen (Dawn at the Palace of Arrakeen by John Schoenherr, The Illustrated Dune) 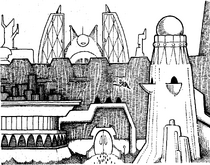 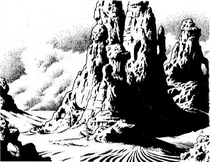 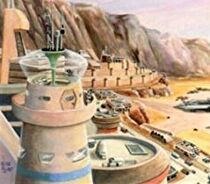 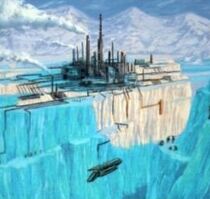 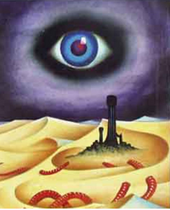 Some of the screen adaptations also use particular themes or leitmotifs to represent the planet Arrakis (Dune). The planet and its harsh environment tends to have its own distinct leitmotifs from the leitmotifs associated with the Fremen people or the sandworms.