"The Fremen see her as the Earth Figure, a demi-goddess whose special charge is to protect the tribes through her powers of violence. She is Reverend Mother to their Reverend Mothers. To pilgrims who seek her out with demands that she restore virility or make the barren fruitful, she is a form of anti-mentat. She feeds on that strong human desire for the mysterious. She is living proof that the 'analytic' has limits. She represents ultimate tension. She is the virgin-harlot - witty, vulgur, cruel, as destructive in her whims as a coriolis storm."
―St Alia-of-the-Knife as taken from The Irulan Report[src]

Alia Atreides (November[1] 10191 AG - 10219 AG), also known as Saint Alia of the Knife and later Coan-Tean ("the female death-spirit who walks without feet") to the Fremen and called Hawt the Fish Monster on the outer worlds, was the posthumous daughter of Duke Leto Atreides I and his Bene Gesserit concubine Lady Jessica, born on the planet Arrakis. She was the younger sister of Paul Atreides. As regent of the Atreides Empire, she established an autocratic government based on the cult of her personality. She later leapt to her death in defiance of the possession by the spirit of a younger Vladimir Harkonnen retained in her Other Memory.

During the invasion she poisoned Baron Vladimir Harkonnen with a Gom Jabbar, although not before revealing to the latter her familial ties to Harkonnen, and slew dying soldiers on the battle field for their water, earning her the name St. Alia of the Knife.

After increasing pressure and control from the internal genetic council of Vladimir Harkonnen, Alia orders the assassination of The Preacher, despite knowing it was her beloved brother. Upon Leto's return from the desert and a subsequent battle, he gives her a choice, the Trial of Possession or suicide. In a final act of defiance against the surmounting internal control from the Baron, Alia throws herself from a high window to her death, a death that was witnessed by her mother Jessica, the Atreides twins, and Farad'n Corrino.

The impact of Alia's religious powerbase was long-lived. Many considered her a revered figure for several hundreds of years after her death. In the months prior to Leto II's death, a Cult of Alia was discovered on Giedi Prime by Duncan Idaho's agents. Ultimately, Alia's influence vanished after Leto's death, some three and a half thousand years after her own death. 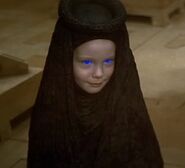 Laura Burton as Alia in the 2000 TV miniseries

Though it was not shown in the films, in the books Alia was stated to have begun to gain weight toward the end, A "plumpness which had begun to bulge her body", showing she might have been overindulging due to the Baron Vladimir Harkonnen's influence.